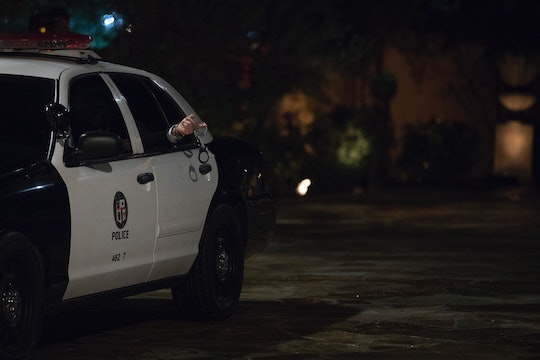 'The Bachelor' Premiere Had Two Engagements Before The Cocktail Party

After 23 seasons, The Bachelor had to resort to some next level gimmicks to keep Colton's season premiere feeling fresh. So they staged a multi-city live viewing party, with Chris Harrison hosting in LA, while various Bachelor alums hosted super fan viewing parties in cities across the United States. One Utah couple even got engaged before Ashley I. and Jared's very eyes. But when a second couple got engaged on The Bachelor premiere, Twitter had enough.

The first proposal happened in Park City, Utah, where a guy named Alex got engaged to his girlfriend of three years live on TV in a longwinded proposal that was more than a little awkward to sit through. Then, ABC producers made it happen again (I guess no one was keeping an eye on how this was playing out on social media?) at a different watch party in Lansing, Michigan. That one was hosted by Blake and Jason from Becca's season of The Bachelorette. At a massive house party, they invited a pregnant super fan named Kimberly up to the mic to talk about the wildest lengths she had ever gone to for The Bachelor. She admitted that one time, her cable went out in the middle of an episode, and she made her boyfriend stand near the TV holding an antenna so they could watch the show via local broadcast.

Of course, that boyfriend just so happened to be standing by when Blake asked more about him, and it was pretty clear what was going to happen next. He began waxing rhapsodic about his beautiful pregnant girlfriend, gushing, "I obviously love this girl. I would do anything for her, like hold an antenna for 45 minutes to watch The Bachelor."

He continued, gesturing toward her baby bump:

"I mean, look at her, she's glowing. Kimberly, pregnancy has only made you more beautiful. I can't wait to grow old with you, and I'm excited for all the adventures we're going to have, especially with our plus one. I'm overwhelmed by you and today, I'm going to ask you to be more than just my best friend. I want you to be my partner in crime for life."

Somewhere in that moving speech, Kimberly obviously understood what was happening and began to cry. He got down on one knee — with a Neil Lane diamond ring, natch — and proposed, and Kimberly managed to nod out a yes through tears and in spite of a loudly cheering audience of spectators.

Kimberly's parents even popped out to hug their daughter and congratulate her, while Blake and Jason appropriately gushed over her enormous engagement ring. But watching strangers propose to each other as part of a Bachelor viewing party just doesn't pack the emotional punch of watching actual contestants get hitched. Bachelor Nation found the whole thing to be kind of mortifying and awkward, so hopefully, ABC hears the message.