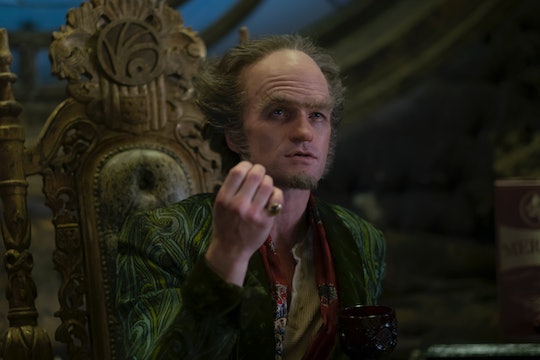 "Maybe I'm too Pollyanna about [life]," Neil Patrick Harris says to me on the set of Netflix's new A Series of Unfortunate Events. I had just made the journey to Vancouver, Canada not even 24 hours earlier to visit the set of the wickedly fantastic show based on the beloved series from many millennials' childhoods. If you're unfamiliar, then that is a grave misfortune. The story centers around three children who become orphans after a devastating fire in their home. Their parents die, and they are moved into the home of a sinister, greedy, and evil guardian — Count Olaf. And that's just in the first episode.

"I'm a bit of an optimist," Harris says while trying to think of his own series of unfortunate events. No trips nor vacations come to mind when thinking of something that went terribly, terribly wrong. "If I miss a plane or the cab is going too slow... then I think, well, there's a reason that I need to be here now." But if you want to really capitalize on an unfortunate story, it needs to reach its extreme, much like the show and the Baudelaire children's misfortune. Your car can't just break down on the highway. It needs to break down, you have to get a flat tire, and then it has to blow up.

"If I answer honestly, it sounds like a crappy answer... My life has been wildly fortunate."

Harris considers himself someone who hasn't really had to face the misfortune of the characters in the books. "If I answer honestly, it sounds like a crappy answer," he says, struggling to come up with something that will compare. "My life has been wildly fortunate and I have legitimately been one of the lucky ones [who] gets to go from job to job, just professionally speaking, with people I like and projects that are, for the most part, successful."

A Series of Unfortunate Events is another success for Harris. The force that is Netflix has collaborated with Hollywood powerhouse Barry Sonnenfeld and Daniel Handler (the author of the book series) to create an entirely new world. And even though that world takes up sound stages in an unsuspecting strip of offices in Vancouver, walking onto that set will make anyone, and any generation, feel like they've been instantly catapulted into a hemisphere where darkness, misfortune, dreariness, and evil lurk. It's also really freakin' fun.

The sets are constructed by a team that seems to have never learned the word impossible. They're grand, but not in a way anyone would ever dare to say, "That's believable." I found myself picking my jaw off of the dusty floor time and time again walking through each set. Whether it's circling around the man-made boulders the Baudelaires and Mr. Poe weave through in later episodes, or Aunt Josephine's crumbling house, things are way more than "believable."

The most awe-inspiring set, though, is the village built around Lake Lachrymose. The run-down town preparing for a terrible storm (of course) feels like a fully functioning road of really quirky shops and restaurants. (Seriously, do yourself the favor of rereading The Wide Window to remember just how bizarre this world Handler created was.) The Anxious Clown, a fixture in the book, is terrifying and humorous at the same time — that's kind of what you get with a massive clown face smiling down at you like only he knows what type of horror stands in the way of your future.

What makes the show so different is that unknown horror. Nothing that happens to the children is happy, cheery, or even OK. That's something that you're reminded of throughout every episode. Patrick Warburton warns viewers at every turn to literally turn the show off. What type of person would want to watch the Baudelaires' misfortune? That's what makes this so unique.

"Most books you have a happy ending to them... This is such a different story," Malina Weissman, who plays Violet Baudelaire, tells me.

All of this is paramount to the fans of the series. The recreation of these iconic locations has to be the perfect amount of nostalgia and new — a rather tricky combination. Harris, who has to step into some pretty big, ugly, smelly, and dark shoes, doesn't see the fandom surrounding the book series as added pressure, though. "I think of it as a responsibility," he says. "I have no interest in being an actor who says, 'Yeah, yeah, that's the books, but we're going to do our own thing.'"

In 2004, a movie of A Series of Unfortunate Events was released, starring Jim Carrey as Olaf. It didn't hit a lot of the marks fans were hoping for by cramming so much of the series into a two-hour movie. Things were, inevitably, skipped over, or worse for the detail-oriented world, touched on only for a moment. "I think where the movie faltered in my mind a little bit was trying to truncate multiple hundred-page books and take four of them and put them into a two-hour movie." Harris notes that the Netflix original has the "freedom" to take two hours to meticulously tell the story of one book. (The first season of the Netflix show covers the first four books, in eight episodes.)

Harris wasn't aware of the books when they were released, but he basically devoured them after being approached about the role. "It is surprising [that I hadn't read them], because my sense of humor is kind of darker... I love magic and macabre. I think by the time they caught my radar it was book five," which was too late for the actor. "It's the same reason I haven't watched The Walking Dead, because all of a sudden it's Season 6 and you have to start from the beginning."

He hadn't seen the movie, either. In fact, he was encouraged to not watch the movie.

"Did you watch the movie anyway?" I pause.

Patrick Warburton, Netflix's Lemony Snicket, was more familiar with the story, but didn't read the books. "My children didn't read it," Warburton tells me during our interview, "Because it made them sad that the parents died. They will not read anything if the parents are dead."

"That's good news for you as their parent," I say. Warburton laughs, which is not usual for his character, Lemony.

Pulling from the pages he reads (Warburton is currently reading Lemony Snicket: The Unauthorized Autobiography when we speak), Warburton takes on a Lemony that seems so natural — even though he hasn't read the books. He stays out of the way of the story, while being one of the most important characters in the tragic tale. His origin isn't known in the first season — fans of the books may know otherwise — but you almost don't need to know his background. You trust Warburton's portrayal without hesitation, for whatever reason. Whether it is his deadpan narration or his command of the screen, Lemony is someone you count as good in a world of evil. Even though we know nothing about him.

Laughing for Neil Patrick Harris is a complete departure from the character of Sham I saw him filming earlier in the day (unless you count evil, maniacal laughter, which is very much on brand for the character). Harris' hours of hair and makeup, at this point, had been completely removed, and sitting in front of me was actor Neil Patrick Harris. Delightful, cheery, theatrical — at one point he completely became Stefano, with the Italian accent and all — and incredibly welcoming. A huge departure from the roles he's taking on for A Series of Unfortunate Events.

The true art behind Harris' roles (yes, plural) is that in every character he takes on — Olaf, Sham, Stefano, and Shirley — evil Count Olaf is still visible in every single one of them. Olaf, for a profession, is an actor. He's a terrible actor, but he's an actor. So when he takes on a different guise to get to the Baudelaires and their fortune, it's as a not-so-great-actor Count Olaf trying to pass as a scientist's Italian assistant, or a romantic and terrifying sea captain, or an optometrist's assistant.

"I struggled quite a bit to make sure it was Olaf playing the characters," Harris says, "And not Neil showing how many characters he as an actor can perform... I was very cognizant of making sure that I was playing effectively and trying not to play the characters too convincingly."

It's very meta: Harris playing an actor playing a character. And not playing those characters too well, because, well, why not make this story a little darker, more terrible, and more complex? With Harris leading a cast of Hollywood all-stars, you can't go wrong with Season 1's first eight episodes. The only truly miserable thing is that it comes to an end. That's the most unfortunate moment for viewers.

A Series of Unfortunate Events is streaming on Netflix beginning Jan. 13 at 12 a.m. PST.