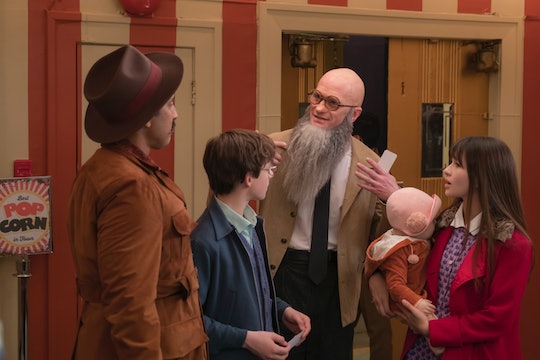 Season 2 Theories Of 'ASOUE' To Look Forward To

Netflix's latest series, A Series of Unfortunate Events, is finally here and by now most people have already binge watched the whole first season and are desperately looking for more. Thankfully, Lemony Snicket, who's real name is Daniel Handler, has told Entertainment Weekly he's currently working on Season 2. Filled with an amazing cast, music, and plot twists, it's no surprise that a second season is a given. Of course with another season comes the question, what happens next? There's already plenty of A Series of Unfortunate Events Season 2 theories, mainly because the series is based on the bestselling books.

The first season of the show only went through the first four books of the series, so there's still nine more books to get through, which means there's a lot more unfortunate events to come. So far the show has left fans with a lot of questions. Are the Baduelaire's parents really dead? Who are the Quagmires and where is the third one since he's not seen at the school with his siblings? What does that eye symbol mean and where is Jacquelyn now? Why does Count Olaf hate the Baudelaire children and what secrets were their parents keeping from them? There's plenty of questions about what will happen next, but here are just a few of my theories about what will happen in a potential second season.

In the final episode of the season, the camera zoomed in to show an old picture of Count Olaf and Lemony Snicket at Prufrock Preparatory School, where the Baudelaires and Quagmires are now currently at school. Throughout the first season, Count Olaf made snide comments about Lemony and Lemony clearly knows a lot about the Count as well. Hopefully in the next season fans will learn more about their interesting connection and what happened to make it go so horribly wrong.

The Quagmires & Baudelaires Will Team Up

At the end of the season, fans unfortunately saw the Quagmires house set aflame by a mysterious person (Count Olaf?). Based on the two Quagmires appearing at the school, one can assume their parents are now also dead. Lemony strongly hinted in the finale that the two groups of siblings would become friends and that they each had a piece of the spy glass that their parents used in whatever secret organization they were all involved in.

The Secret Society Will Be Revealed

As Season 1 progressed the Baudelaires, as well as the viewers, began to learn there was more to their parents than they first believed. However, they still don't really understand what their parents did or who all these guardians were that knew their parents but the children had never heard of. With the Quagmires help I'm sure we'll get more answers about what their parents were involved in and how Count Olaf got involved with it all.

Jacquelyn disappeared at the halfway point of the season, but there's no doubt she'll be back. Based on the novels, I believe Jacquelyn is the TV series version of Jacques Snicket, Lemony's brother and a member of the secret society. If this is the case we can expect to see her again helping Quigley Quagmire, the brother that didn't make it to boarding school. Hopefully, she can continues to help all these children escape from Count Olaf's evil schemes.

Basically, Season 2 needs to get here ASAP because we still have a lot of unfortunate ground to cover.