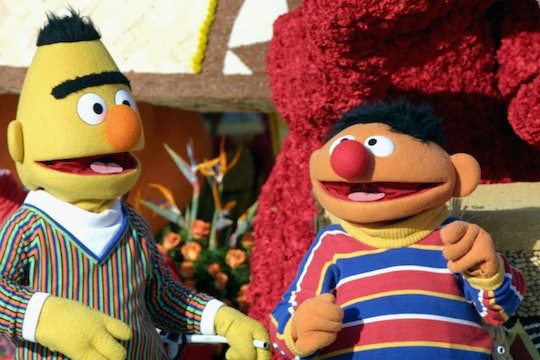 After 50 Years, 'Sesame Street's Bert & Ernie Are Finally Out Of The Closet

For generations, children have enjoyed watching — and learning from — the beloved characters on Sesame Street. From Big Bird, Oscar, Bert & Ernie, to Elmo and Abby Cadabby, these characters are so deeply intertwined with our culture, that I'm sure kids who don't regularly watch the show can probably name them off. So it isn't too surprising that a revelation from one of the show's former writers is making waves on Tuesday. Because the Sesame Street writer confirmed that Bert and Ernie are gay.

However, once the writer's confirmation went viral, Sesame Street went on Twitter to debunk his claims. According to the show's official account, Bert and Ernie are without sexual orientation due to the fact they are merely puppets:

But, according to the writer, the pair of iconic Sesame Street characters are finally out of the closet — after spending nearly 50 years with the door closed, TMZ reported. Fans of the educational program probably know Bert and Ernie have been on the show ever since it started back in 1969. And while some viewers have had their suspicions for decades, a former writer for the show, Mark Saltzman, finally confirmed the dynamic duo are indeed gay lovers. The Sun reported that Saltzman considers Bert and Ernie's relationship a reflection of his own gay relationship with film editor Arnold Glassman. (Mark was Ernie and Arnold was Bert, for the record.) He stressed, however, that the fact that Bert and Ernie are gay has nothing to do with pushing any sort of agenda.

"I remember one time that a column from The San Francisco Chronicle, a preschooler in the city turned to mom and asked 'are Bert & Ernie lovers?'" Saltzan told Queerty. "And that, coming from a preschooler, was fun. And that got passed around, and everyone had their chuckle and went back to it." He continued:

And I always felt that without a huge agenda, when I was writing Bert & Ernie, they were. I didn’t have any other way to contextualize them. The other thing was, more than one person referred to Arnie & I as “Bert & Ernie.”

Judging by the initial response on Twitter, it seems plenty of viewers are supportive of the revelation that Bert and Ernie are gay lovers. One Twitter user wrote, "Awww, happy coming out day, Bert and Ernie!"

Another Twitter user wrote, "I don't care about the salacious news today. The important thing is that the writer responsible for 'Sesame Street's Bert and Ernie has put to rest straight folks' denial and confirmed that they're a couple and that he, sweetly, modeled them after himself and his partner."

Still, some people aren't convinced. (You know, despite the writer himself confirming the dynamic duo is gay.) One clearly upset Twitter user wrote, "No likes here. I don't know who's been wondering for decades whether or not Bert and Ernie were gay, but I've watched enough episodes as a child and even through my adulthood with my own children to know that that is not the case. Sensationalizing Sesame Street this way is WRONG!"

However, it seems others have suspected Bert and Ernie were more than just friends for years. One person tweeted, "As a little kid, I picked it and asked my dad why they shared a room if they weren’t brothers! I knew they were Mo’s ....I thought I’d got him. Without missing a beat dad said 'its expensive it is to rent a 2 bedroom in New York' hahaha."

Whether or not Sesame Street fans "agree" with the fact that Bert and Ernie are more than very close friends (who happen to share a one-bedroom apartment), you have to admit — it'll be difficult to ever look at the pair the same again. (Sort of like when J.K. Rowling revealed Albus Dumbledore is gay.) I have to wonder, too, if a storyline addressing their relationship will ever eventually be written into a Sesame Street storyline. Because it's one thing for a writer to confirm Bert and Ernie are in a gay relationship. But it would be an even bigger win for the LGTBQ community for Sesame Street to fully embrace them as a couple.

Please note this article has been updated to include Sesame Street's official comment on Bert and Ernie's sexual orientation.

More Like This
Prince George Reportedly Got Sassy In A Fight With A Classmate
Khloé Kardashian Reveals Tristan Thompson Proposed To Her Last Year & Why She Said No
Kim Kardashian Stars In Hilarious House Of The Dragon Parody, The Targashians
Lifelong Teacher Dr. Jill Biden Loves Watching Abbott Elementary Too