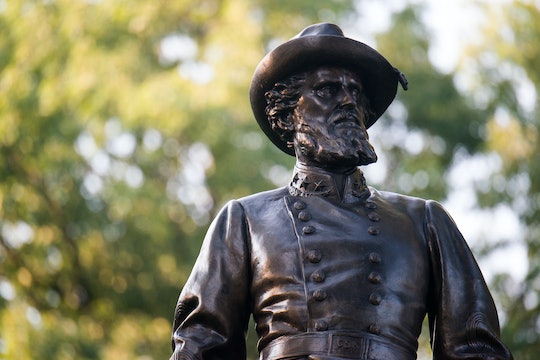 With all eyes on Confederate statues around the country at the moment, it's time to talk about the United States' rather persistent habit of honoring white supremacists, a matter that is not limited to statues alone. In fact, according to a recent HuffPost analysis, there are currently more than 129,000 kids attending schools named after white supremacists. That means, across the country, we're teaching students at nearly 200 schools that racism is bad, sure, but that it's not necessarily a dealbreaker or anything, and you can still have monuments, schools, and libraries dedicated to you. And that attitude, right there, is one of the reasons the United States is now seeing white supremacists pop up loud and proud.

According to HuffPost, there are currently at least 191 public schools in the country that are named after Confederate soldiers or leaders. These are the names of southern men who led the charge against northern states in 1861, in order to keep "the negro" in "his place" of subordination, as Alexander Stephens of the Confederacy put it on the first day of the Civil War, according to HuffPost.

On top of that, the HuffPost analysis found that the majority of the 129,000 students attending these schools are either black or Hispanic. And while a handful of schools that previously honored Confederate leaders have changed their names in recent years, that number still remains small.

People who fight for these names and statues to stay up often say that honoring Confederate leaders is not about slavery — it's about preserving Southern pride, independence, and history.

"To those 70 million of us whose ancestors fought for the South, it is a symbol of family members who fought for what they thought was right in their time, and whose valor became legendary in military history," Ben Jones, the chief of heritage operations for the Sons of Confederate Veterans, wrote for The New York Times in 2015. "This is not nostalgia. It is our legacy."

But in the end, that fight was a fight for slavery — just like the Nazi fight was one to exterminate all Jews (and you don't see Germany erecting Nazi statues or naming schools after Nazis). Yes, these statues and names represent valor and legacy for many, as well, and it's not productive to the national conversation to ignore that. Fortunately, however, a country evolves and values change, and we can recognize when a legacy actually isn't something to be proud of. Perhaps when these schools were named and those statues were erected, the cities that created them valued Southern pride and independence above all else.

Now, however, we need to be absolutely clear that equal human rights, for all Americans, come first. Always. Because as long as we keep sending kids to schools that honor white supremacists, we're telling them the opposite. We're saying, overtly or not, that racism can be overlooked and that human rights don't necessarily come first. And if that's the message we're sending our youngest and most impressionable, then can we really be surprised when rallies full of white nationalists start organizing in our cities?