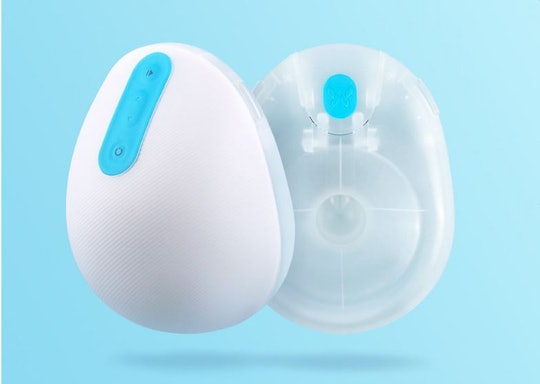 Hey, women, wouldn't it be nice to Have It All (trademark pending)? We're so close now; we've got the kids and the careers. But we're shamed for formula feeding, so we've got to pump. That means spending part of your workday in a dim closet with a rocking chair and a magazine while a noisy machine milks you like a cow. Not very empowering! Enter Willow, a smart robot breast pump that recently debuted at the 2017 Consumer Electronics Show. It's a robot that lives in your bra and slowly drains your life force (or the life source for your kid). The Matrix is real, y'all!

Actually, Willow sounds pretty cool, once you give it a chance. And happily, it's completely voluntary, so if you're not interested in nursing electronics from the comfort of your cubicle, you're free to take a pass... for now. According to CNN, Willow is actually a "pair of teardrop-shaped devices" that fit snugly in your bra and silently pump without any tubes or bottles required. The collection bags, which each hold up to four ounces of milk, are integrated right into the pump. They do seem a tad on the bulky side, though, so maybe invest in a bigger bra? Or at least a stretchier one.

The devices can go a day or two on a single charge, and CNN reported that, in trials, women wore them on trains and during conference calls to test just how silent they were. How did it go? They left that part out! But even if it does make a little noise, who cares? If some rude commuter is bold enough to ask a stranger, "Excuse me, madam, but is that whirring and grinding sound emanating from your brassiere?" that's really on them. Besides, privacy isn't the main draw for Willow; it's convenience. Unlike a regular breast pump, you can cook, wash dishes, or change a diaper while wearing Willow. Finally!

Willow also integrates with an app that tracks your milk volume in real time, records past pumping sessions (so you can try to beat your high score, obvs) and sounds alerts when your robot gets hungry for more milk. It also "senses your let-down and automatically transitions to expression phase based on your body’s own unique milk production and timing," according to the manufacturer, which I find both thrilling and terrifying. Unfortunately, there's no completely dignified way to milk a human being, but if you have to do it, at least now there's a cool, high tech way to get an iPhone and a couple of lithium-ion batteries involved in the process. All hail our robot overlords! Willow launches in the spring, and will retail for $430.

More Like This
Ginger Zee Had A Perfect Response After A Troll Asked Her "Who's Raising Your Kids?"
This Reddit Post About Two Sisters In A Fight Over Breast Milk Is Complicated & So Sad
It's A Beautiful Day In Jenny Slate’s Neighborhood
These Boys Saved Their Dad From Drowning With CPR They Learned From The Sandlot