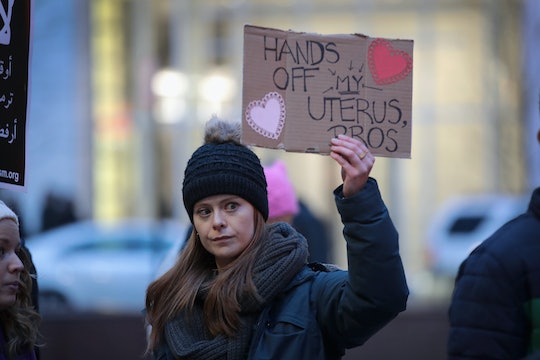 If you've been too busy with Thanksgiving preparations to slog your way through the 400-plus page tax reform plan that House Republicans passed on Thursday, I completely understand. But there's one part that you absolutely need to know about, regardless of your income bracket, because a particularly sneaky piece of language in the tax code is a step towards outlawing abortion, and make no mistake, it serves absolutely no other purpose.

The House bill text on college savings plans states, in part, "Nothing shall prevent an unborn child from being treated as a designated beneficiary or an individual under this section," according to a copy obtained by the New York Times. It goes on to define an "unborn child" as a "child in utero," and a "child in utero" as "a member of the species homo sapiens, at any stage of development, who is carried in the womb." The text purportedly offers a way to allow parents to start a tax-deferred savings account for tuition before their child is born, which on its surface may sound perfectly reasonable. After all, most parents start buying clothes and cribs and diapers when they're expecting, what's the harm in preparing for their long-term expenses, as well?

Marjorie Dannenfelser, president of the anti-choice group Susan B. Anthony List, praised the line in a statement, saying that it "recognizes the humanity of the unborn child and gives parents the opportunity to save for a child's education from the earliest stages of his or her life." Jeanne Mancini, president of the anti-choice March for Life took it even further, telling Politico that, "a child in the womb is just as human as you or I," and "we hope this is the first step in expanding the child tax credit to include unborn children as well." Now, I'm not saying that there aren't any costs associated with pregnancy, but that's a bit like pulling on a "#1 Dad" t-shirt five minutes after conception, no?

And here's the thing: prospective parents-to-be can already legally start a 529 college savings plan for kids who don't exist. According to the Internal Revenue Service, any person is free to start an unlimited amount of 529 plans at any time, and "name anyone as a beneficiary — a relative, a friend, even yourself." Additionally, "There are no tax consequences if you change the designated beneficiary to another member of the family," and the funds distributed from a 529 plan aren't taxable if you roll them over to another family member's plan, so a couple who hasn't even met yet could already start saving for their hypothetical children today, and sort it all out when the time comes.

So if you can already do the one thing the rule is supposed to allow, what's the point? Colorado Rep. Diana DeGette released a statement outlining her theory:

This is a back-door attempt to establish personhood from the moment of conception. Even in the tax reform debate, Republicans could not resist including offensive provisions to appease an extremist minority. The tax code is no place to define what constitutes an 'unborn child.' What’s next, giving a Social Security number to a zygote?

An early markup of the Senate's version of the bill prepared by the Joint Committee on Taxation, also contains the proposal, even after acknowledging, just one page earlier, that 529 account owners have "the ability to change designated beneficiaries," thereby proving that it's completely redundant, as far as taxes are concerned. Legally defining an "unborn child" as a person would establish equal protection for fetuses, the biggest stumbling block to overturning Roe v. Wade. The Senate Finance Committee advanced the bill on Friday, according to CNBC, and a vote is expected after the Thanksgiving break. It will pass unless three Republicans oppose it; currently Wisconsin Sen. Ron Johnson is the only one who's gone on record saying he will. If you disagree that a single cell should have the same legal rights as a grown woman, call your senator today.