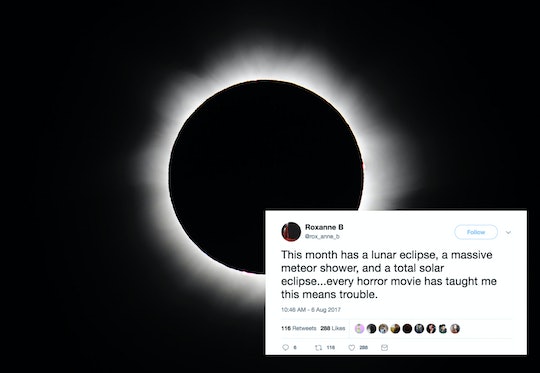 One of the most spectacular astronomical events of the year is just a couple of weeks away when a total eclipse of the sun will take place on Aug. 21. Eclipse mania is nearly at its peak right now, as people around the world prepare for what will hopefully be an amazing display. If you live in the United States, you're in for a treat: The country is supposed to have the best views. But some places are better than others, which is why figuring out where to watch the eclipse with a 2017 solar eclipse map is super important.

Obviously, NASA has you covered: You can find not just one giant map of the entire path of the solar eclipse, but how it should appear depending on the individual state. The path of totality — the point at which the moon completely blocks the sun save for the sun's corona — covers a narrow band across the country where 100 percent totality can be seen, and will cross 14 states, according to NASA. According to TIME, if you live in Goreville, Illinois, congrats: You've scored the best place to see the eclipse in the United States. Totality will last for an awesome two-and-a-half minutes in the tiny city of 1,067 residents.

But let's say you're not one of the lucky folk in the tiny town of Goreville — what then? TIME stepped up to the plate to not only calculate what the solar eclipse will look like where you are, but it has gone and made these views into animated GIF form, too — complete with a running timeline you can pause, and an approximation of how dark the sky will be. This is especially handy if the weather doesn't turn out to be so eclipse-friendly on Aug. 21, because then you can always have an endlessly looping GIF of the moment forever.

But maybe you're not ready to settle for just any old solar eclipse GIF and you just have to be there in person for the event. Vox has you covered like whoa. Simply plug in your zip code here and Vox will not only calculate what the eclipse will look like for you, but the closest location to see the solar eclipse at full totality from where you are. According to Vox, I'll need to make a 770-mile schlepp to somewhere in South Carolina for the best view when the solar eclipse reaches its peak at 2:46 p.m. Eastern Time.

Of course, there's one other very important map you're going to need for solar eclipse day: your local weather map. According to Weather.com, the weather should be pretty good on Aug. 21 — but take that with a grain of salt, given that its meteorologists made their predictions for August back in May. Even if the weather doesn't cooperate or you just can't make a 700-mile trek to see totality, don't worry — there will be plenty of solar eclipse videos on YouTube. And — dare I say it — they'll be out of this world.