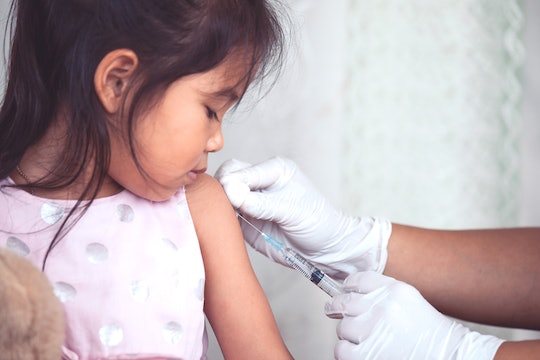 Flu season can be a particularly stressful time of year for parents of young children. With the added risk and potential for complications, the flu can pack a hefty punch for little ones. But despite their vulnerability, a startling number of parents skip flu shots for their kids, according to a recent study. And, unfortunately, their decision could put their children at great risk.

In a report published on Monday by C.S. Mott Children's Hospital, 34 percent of American parents stated that their child would not get the flu vaccine this year. Researchers gathered the information on 1,977 parents with one or more children via an online poll, according to CNN. The parents provided information on whether or not they would vaccinate their children against the flu this season, as well as their reason why or why not.

Of the 1,977 participants, 48 percent stated that they tend to follow flu shot recommendations from health care providers, but 21 percent of participants couldn't remember receiving such a recommendation, as CBS affiliate 3 News Now reported. In reference to the findings, Sarah Clark, co-director of the C.S. Mott Children's Hospital National Poll on Children's Health at the University of Michigan, pointed to a need for increased guidance from experts.

"To me, the biggest takeaway is that there is a group of parents who look like they have a gap in expert guidance around whether kids should get flu vaccines," Clark told CNN. "Specifically whether their kid should get flu vaccine." Adding to that takeaway, Clark explained to Mott Children's Hospital that parents rely on health care providers to guide them:

Child health providers are a critical source of information to explain the rationale for annual flu vaccination and to address parents’ questions about flu vaccine safety and effectiveness. Without clear guidance from the provider, parents may be left with misinformation, such as the suggestion that flu vaccine causes the flu.

Along with expert recommendations, parents also cited comments from their peers about the flu shot as an influencing factor. Those who were vaccinating their children reported hearing more positive comments than negative, while those who would not be vaccinating reported hearing the opposite — a phenomenon that the Mott Children's Hospital referred to as an “echo chamber” of information. Negative comments involved side effects of the vaccine, lack of effectiveness, and feelings that healthy children don't need vaccines.

For those parents who listen to their peers more than the advice of experts, Clark told Mott Children's Hospital that experts need to come up with a way to reach them more effectively and combat the echo chamber:

It’s important to acknowledge that for some parents, child health providers are not the sole influence, or even the primary influence, on decisions about the flu vaccine. For these families, we need to explore other mechanisms to convey accurate information and allow parents to hear a more balanced viewpoint.

Unfortunately, unvaccinated children are at added risk of infection. According to the Centers for Disease Control and Prevention, estimated flu-related hospitalizations since 2010 for children younger than 5 ranged from 7,000 to 26,000 in the United States alone. As the Mayo Clinic reported, even healthy children are at risk, simply due to their age. Children between the age of 2 and 5 are more likely to require hospitalization for the flu or complications of it. For this reason, both the CDC and the American Academy of Pediatrics recommend vaccinating children 6 months and older. And families with babies too young to receive the vaccination, parental inoculation is the best means of protection.

It is worth noting that children require two weeks after vaccination before they are fully protected from the flu. This flu season, consider listening to your health care provider over your neighbor, PTA friends, or other well-meaning voices. And if your child's doctor fails to raise the subject of flu vaccines, do it yourself. Your child will thank you.