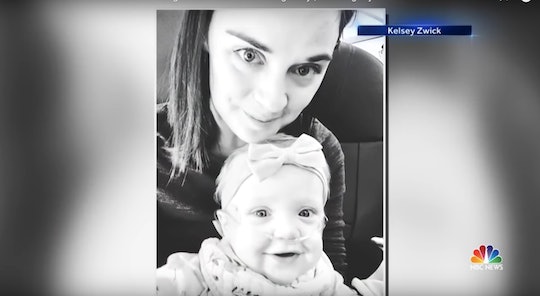 During the holidays, as you navigate family and other relationships that can sometimes be stressful, it can be easy to lose a little bit of your faith in humanity. This new story, though, should remind you that there are extraordinarily good people in this world. Recently, a stranger gave this mom and her sick baby his seat in first class. It was a gesture that was immensely appreciated by all.

Flying with babies can be difficult. The fact is that babies do baby things; they may fuss, or cry, and people around them aren't always understanding. Parents have been sharing tips with each other on how to master flying with a baby, but things get a little more complicated when your baby is sick.

On Thursday, Kelsey Zwick and her 11-month-old daughter boarded American Airlines Flight 588 from Orlando to Philadelphia, as reported by Today. The mother and daughter pair were heading to the Children's Hospital of Philadelphia (CHOP) where Lucy, who was born prematurely along with her twin sister, receives treatment for chronic lung disease, according to NBC Philadelphia.

A flight from Orlando to Philadelphia may not be a big deal for adults, but it can be a lot for kids. According to FlightSphere, the average time for that flight is 2 hours and 20 minutes.

For both mom and baby, those can be a long two hours. But one kind stranger stepped in to make Zwick's trip a little easier. According to NBC Philadelphia, a flight attendant approached Zwick after pre-boarding and told her a passenger from first class wanted to switch seats.

Zwick shared a photo of herself and her smiling daughter, wearing a nose cannula, inside the plane on Facebook.

"To the man in 2D. Today you were traveling from Orlando to Philly. I don't know you, but I imagine you saw us somewhere," Zwick began in her caption, going on to say:

I was pushing a stroller, had a diaper bag on my arm and also lugging an oxygen machine for my daughter....We pre- boarded the plane, got cozy in our window seat and made jokes to those around us about having to sit by my yelling-but-happy baby. The flight attendant came over and told me...You were giving up your comfortable, first class seat to us...Not able to hold back tears, I cried my way up the aisle while my daughter Lucy laughed! She felt it in her bones too... real, pure, goodness. I smiled and thanked you as we switched but didn’t get to thank you properly.

The Facebook post was Zwick's attempt at reaching back out, to properly thank the man for his act of kindness. The post has gone viral, having been shared over 485,000 times.

If you're wondering who was the kind stranger that gave up his seat for Zwick and baby Lucy, Today reported that the good Samaritan was Jason Kunselman of Mechanicsburg, Pennsylvania.

Kunselman told ABC News about the encounter, saying, “She came up [in line to board] and had the normal roller board luggage and also which I found out later, was an oxygen concentrator...I went up and asked the flight attendant if she thought she would be more comfortable sitting up in my seat and I would take the one in the back.”

American Airlines caught wind of Zwick's post and were able to connect her with Kunselman, according to ABC News.

This is a moment that Zwick will be able to share with her daughters as they grow up. It's a perfect illustration of what the holiday spirit means.