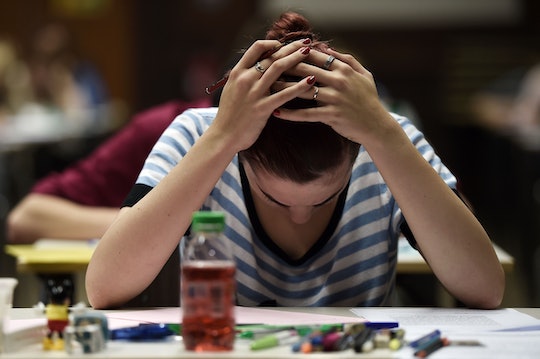 A Texas 8th Grader Died After Being Bullied, & It’s a Huge Message To Parents & Educators

On Tuesday night, a Texas eighth-grader died after being bullied. Isabella Scott, a 12-year-old, was found dead in her home, and may have committed suicide after being bullied. The recent suicides of students such as Scott and 13-year-old Daniel Fitzpatrick of New York send a huge message to parents and educators about the effects of bullying in schools.

Students and staff at the Comal Independent School District campus learned of the news on Wednesday. “The teacher came in crying, so I knew something was wrong,” said Elaine Miner, an eighth -rader at Church Hill Middle School, in an interview with News 4 San Antonio. “And then a lot of people, they just walked out of class crying during some periods."

A spokesperson for the Comal Independent School District said in a statement to News 4 San Antonio that they "have no record of an outcry of bullying from the student to any teacher or campus administrator."

Both the Comal Independent School District and Scott family could not be reached for comment.

Although there is no federal law in place to prevent bullying in schools, 49 states have laws and policies implemented to protect students from bullying. Texas, which is where Scott attended school, has anti-bullying laws established that allow parents to transfer their children to another classroom or even another school if they either initiate bullying or are the victims of bullying. However, Texas is among several states that does not offer a model policy to help local schools establish their own policies and regulations on bullying.

Texas law also doesn't establish a definition for bullying. In order for these policies to be enforced, educators need to be trained on what bullying is and how to stop it. Educators need to look out for verbal bullying (teasing), social bullying (leaving someone out on purpose), and physical bullying (hitting and kicking). Just 17 states require that school staff report bullying to a supervisor, while 11 states require that schools allow anonymous reporting by students of bullying, according to an analysis of state bullying laws compiled by the Department of Education.

The study also shows that the punishment for bullies varies widely: some schools implement focus on changing bullies behaviors instead of taking disciplinary action, while in 18 states there are laws that allow victims to take legal action against their bullies.

Parents who are concerned their child may be the victim of bullying can look for these warning signs:

One out of every four students faces bullying, yet most kids who are bullied do not report it to their parents or teachers. LGBT students are most vulnerable: studies show that more than 80 percent of LGBT students face harassment in school. And because of cyberbullying, bullying doesn't stop once the school day ends. Although bullying does not "cause" suicide, there is a link between the two: studies show that students who are bullied are twice as likely to think about suicide and 2.5 times more likely to try to kill themselves.

If parents are concerned their child is being bullied, connecting with their teachers is essential to finding out what's going on in their classrooms. The case of Isabella Scott is a reminder of just how serious an issue bullying can be — and that we need to do much more to stop it.