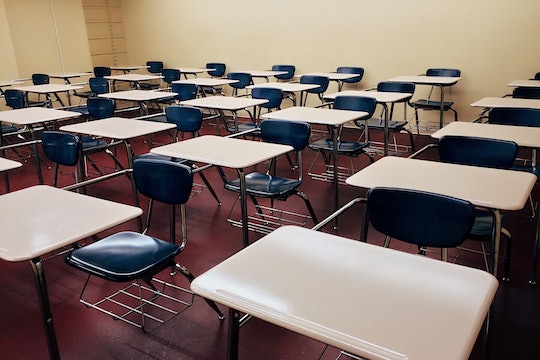 Discipling children is something that parents often do to teach their kids right from wrong. Each parent has their own beliefs when it comes to what they believe is an acceptable form of punishment, which makes every parent unique. But there is a fine line when it comes to punishing your own child for bad behavior and how a school punishes your child for breaking a rule. Case in point, a Texas school district approved this terrifying form of punishment for kids that might make some parents concerned.

In a 6-0 decision, the Three Rivers Independent School District in Three Rivers, Texas, approved to allow the school's campus behavior coordinator or principal to administer paddling as punishment. The paddle, which will likely be made out of wood, according to USA Today, will only be used on students whose parents have provided written and verbal consent — and only be used for when those students are "disobedient to teachers" and "not following rules in the classroom." Three Rivers Elementary School's campus behavior coordinator, Andrew Amaro, told the Corpus Christi Caller-Times, that he hopes the disciplinary measure will have "more of an immediate effect" on students than other punishments, like In School Suspension or detention. Mary Springs, superintendent for Three Rivers Independent School District told Romper:

While this does seem terrifying for students (and their parents too), corporal punishment in schools is perfectly legal.

Corporal punishment and paddling children in schools is legal in 15 states (seven do not prohibit it, the rest have banned it), according to NPR, and is allowed due to a 1977 Supreme Court case that found that spanking does not violate a student's rights. Although incidents of corporal punishment have declined in recent years, its still scary to know that children across the nation could be in pain just for talking back in class. An investigation done by EdWeek found that in the 2013 to 2014 school year, 110,000 students were physically punished nationwide.

Most schools will not physically punish students without the consent of their parents, but it doesn't mean that this kind of punishment is in the best interest of the child. According to ABC News, a 2002 study completed by the American Psychological Association found "strong associations" between corporal punishment and negative behaviors, like an increase in child aggression and antisocial behavior. The American Academy of Pediatrics "strongly opposes" spanking.

Superintendent Springs told the Corpus Christi Caller-Times that corporal punishment data will used to determine whether or not students are behaving better and if the punishment is actually effective. While the Three Rivers Independent School District is the most recent school district to approve of paddling in schools, it certainly isn't the first and won't be the last.