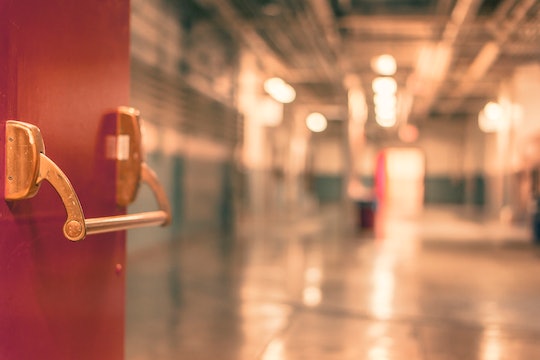 A Texas Student Was Pulled From Class For Her Hair, & Her Mom Says It Was "Discriminatory"

In a report posted on TODAY, a Texas mother called for an apology and cultural sensitivity training after her 9-year-old daughter was asked to leave school over what administrators claimed was a violation of the campus dress code. According to that report, the violation was a hairstyle: a row of six ponytails that the school apparently interpreted as a faux mohawk, but the girl’s mother said they were simply afro puffs appropriate for her daughter’s hair texture. So, was a Texas third-grader sent home for having natural hair? That question is raising concerns over cultural sensitivity for the Texas school district.

In an interview with TODAY, Marian Reed said her daughter went to her Temple, Texas, classroom last week with her hair pulled back in a hairstyle similar to one she’d worn frequently since kindergarten:

My daughter's natural hair does not lay flat. When I styled it that day, we didn't put it in a mohawk or a faux hawk. It was simply a quick, kid-friendly hairstyle. Never thought twice about it.

But this time, during the 9-year-old’s physical education class, an assistant principal pulled the little girl out of class and sent her home because of an apparent violation of the school’s dress code.

In a statement issued to Romper, school officials said the situation “was handled like any other dress code issue” and provided a link to the Belton ISD student handbook, including the school dress code. According to that policy, students aren’t allowed to wear any hairstyle that could be seen as “disruptive” or “indecent,” and includes among the examples given, “extreme hair color, extreme hairstyles, designs cut in hair, mohawks, [and] faux-hawks.”

Dr. Charla Trejo, executive director for campus leadership for the Belton ISD says that the administrators’ goal was to apply the policy consistently across the student body:

Occasionally an elementary student will come to school with a ‘faux hawk,’ hair that has been styled to look like a mohawk. When that happens, a principal or assistant principal talks with the student and calls a parent to make them aware of the dress code issue.

[I]t would be extremely unusual for an elementary student to be disciplined for a dress code issue. We resolve those types of issues by asking a parent to take care of it.

Romper reached out to Reed for details on what she said her daughter encountered and has not yet received a response. However, speaking to local NBC affiliate, KCEN-TV, Reed said that the exchange with school officials left her daughter feeling humiliated and worried. “She cried and said no one was going to want to be her friend because her hair was not as pretty as the assistant principal's,” Reed said. “And, as a parent, that's heartbreaking because that's just what God naturally gave her.”

In her KCEN interview, Reed said she questioned the action because her daughter’s hair wasn’t shaved or in an actual mohawk. She also said that the hairstyle had raised no alarm bells when her daughter had worn it with longer, less textured synthetic hair.

The Texas mom told the outlet she disagreed with the school’s handling of the situation.

They could have called me and discussed it with me without pulling her out of class and without having that conversation in front of her because now she's questioning her natural image. And, at nine years old, she's going to remember that for the rest of her life.

According to KCEN, Reed is simply looking for an apology from school officials and some awareness that treating her daughter’s natural hair texture as “disruptive” would have some impact on the little girl’s self esteem. “I don't believe that it was intended to be racial,” Reed said, according to that report. “But, I think, the district as a whole may need some cultural diversity training.”

The district offered no word that training may be forthcoming, saying in its statement that federal and state laws limit its ability to comment about individual student incidents.