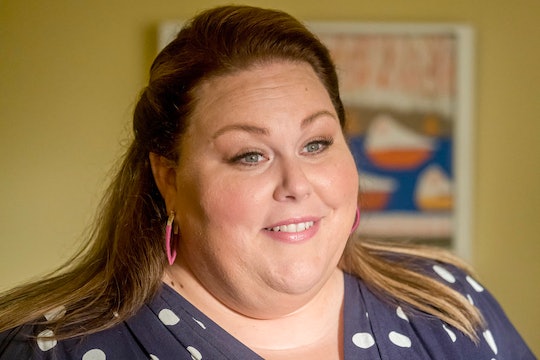 How Do I Un-hear This Tragic But Totally Plausible 'This Is Us' Theory?

This Is Us thrives on the tears of its viewers. Fans know this by now, which is why they are already predicting tragedy before Season 4 is even fully underway. There is already a This Is Us theory about Kate (Chrissy Metz) that is so sad you are going to need tissues before you continue reading. But this is the show that that killed off a beloved patriarch via CrockPot so nothing is really off the table here.

Fans on Reddit are already predicting that Kate might be dead in the show's future timeline after meeting Kate and Toby's (Chris Sullivan) adult son, Jack (Blake Stadnik) on the Season 4 premiere. Tragic? Of course. Plausible? Oh, totally.

The theory comes from Redditor Guhprincipe who wrote on the site, "I THINK KATE IS DEAD!" citing evidence from both the Season 3 finale and the Season 4 premiere of the show to support the idea. "I've watched season 3 finale again and I noticed that no one asks about Kate in the future scene." Of course, you can't assume death from that alone, but the user continued, "Toby isn't wearing his wedding ring when he speaks with Randall, and the 'they' he is talking about must be Jack and his girlfriend. And we know Toby is depressed in the future, as we saw in the last middle season. So, Kate, I'm so sorry, but you may be dead..."

It's possible no one asks for Kate because the show was trying to keep the mystery of who "She" is going until the very end of the Season 3 finale. But the fact that fans know Kate's son Jack is a well-known singer at the end of the Season 4 premiere makes me even more worried Kate is dead.

This Is Us loves to tug at viewers heartstrings in big ways, and as Redditor BuzyBeeJ said, "he’s living Rebecca and Kate’s dream." How much more emotional and full-circle can the show get than to have a man fulfill the dream that both his mother and grandmother couldn't to the fullest extent? That is so much more meaningful if they are both dead.

If your mind goes to the extremes that mine does with This Is Us, you could even say that little Jack is living a dream of his grandfather, Jack (Milo Ventimiglia). He's pursuing his desired career to the fullest extent and he's happy and expecting a child with Lucy (Auden Thornton). The older Jack struggled with sacrificing his dreams to provide for his family while the younger Jack is living it up. It's a believable This Is Us journey.

Of course, only the show's creator Dan Fogelman knows whether Kate is alive or dead, but he's not answering any questions in a satisfying way. "The goal is to never fall into a pattern where the show just becomes expected,” he told Entertainment Weekly.

As for Kate's status, he said later in the same interview, "Where’s Kate? What’s the status of Kate and Toby? It will take a while to get there, but that’s part of the fun of moving forward into the series.” Great. I'll have to have tissues next to me for the foreseeable future while watching This Is Us. But that's part of the fun for me, when it doesn't lead me down deep rabbit holes.