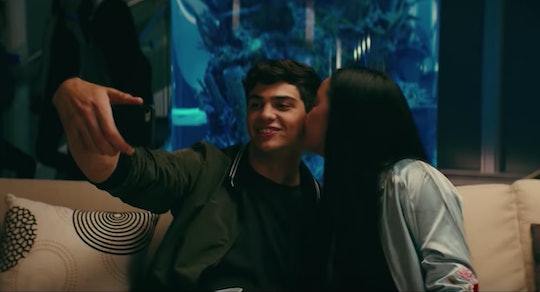 If you're anything like me — a 30-something millennial mom of three — then you probably still love a good coming-of-age teen rom-com. Which means you totally indulged in To All the Boys I've Loved Before back in August when it dropped on Netflix. Consequently, you fell in love with Lara Jean Covey and Peter Kavinsky, and were dying to see what happened next even after the credits started rolling. (Because I mean, how could you not?) Well, fans of the wildly-popular Netflix movie will be ecstatic to learn that a To All the Boys I've Loved Before sequel is likely coming soon.

According to The Hollywood Reporter, a sequel to Lara Jean Covey and Peter Kavinsky's unconventional love story is "one of the first movies being discussed" as part of Netflix and Paramount Pictures' new multi-picture deal. (Which means it's basically a done deal, if you happen to be a fan of the movie.) So where will the story go from here, you ask? If you didn't already know, the original movie is based on the best-selling novel by Jenny Han — which is actually book number one of a trilogy. Book number two is titled P.S. I Still Love You and book three is Always and Forever, Lara Jean.

As E! Online pointed out, To All the Boys I've Loved Before featured a brief credits scene that likely gave viewers a clue to what comes next in the story. The scene features another one of the recipients of Lara Jean's letter, John Ambrose McClaren. And the description of P.S. I Still Love You seems to confirm this theory. "Lara Jean didn’t expect to really fall for Peter. She and Peter were just pretending. Except suddenly they weren’t," the plot description reads. "Now Lara Jean is more confused than ever." It continues:

When another boy from her past returns to her life, Lara Jean’s feelings for him return too. Can a girl be in love with two boys at once?

Director Susan Johnson also spoke with ET back in August about potentially doing a sequel, along with where it would take the characters. "We’re so invested in Peter and Lara Jean, that seeing them go through struggles is going to be hard but also something everybody can relate to," Johnson said of the plot. "The next shiny face comes in and you’re like, 'Oh shoot, this guy’s really nice too. What do I do?'"

Regardless of how a To All the Boys I've Loved Before sequel will play out, Twitter is definitely excited that it has essentially been confirmed. One person tweeted, "By far the best news of the day/week/month. This sequel had been rumored for a while, but now it’s official."

Another person tweeted, "CHRISTMAS CAME EARLY! There is going to be a sequel of #toalltheboysivelovedbefore. Now if only they could make a series just about the Covey sisters."

Yet another person chimed in with, "I CANNOT PROPERLY ARTICULATE THE JOY THIS BRINGS ME."

Actor Noah Centineo — who portrays Peter Kavinsky — told Variety in August that the To All the Boys I've Loved Before cast was all-in when it came to a potential sequel. “All I know is that every single person involved in the making of that film wants a sequel,” he said. “We’ve all talked about it in depth. I’ll do as many as they want me!” (Yass!)

Unfortunately, it isn't clear how long fans will have to wait to see what happens next in Lara Jean Covey's secret-love-letters-exposed saga, especially since a rep for Netflix told Variety that the sequel isn't "confirmed" quite yet — but that discussions are ongoing (though Variety also cited director Susan Johnson's Instagram post that seemed to confirm it was a go). But whenever the second installment of the To All the Boys I've Loved Before does drop on Netflix, you can bet I'll be here for it. In the meantime, I might have to invest in the trilogy...