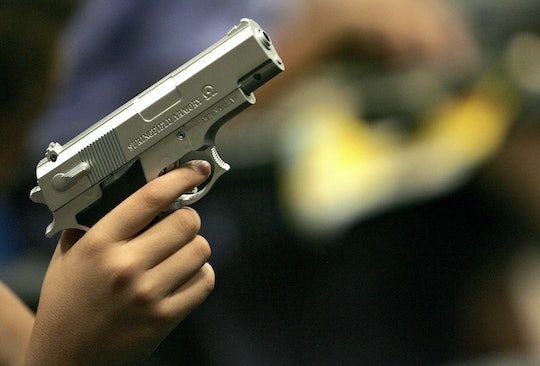 A Toddler Has Shot Someone Every Week For 2 Years

Sometimes you come across a headline that's almost too unbelievable to be true, but then there's the adage that truth is stranger than fiction. In this case, the truth is horrifying compared to fiction: Statistics from the end of 2016 indicate that a toddler has shot someone everyone week for the last two straight years. That's not a typo. This isn't The Onion. This is a disturbing reality that plays out in households all across America.

The U.S. is a country that already has the highest number of gun deaths in the world. In fact, no other country even comes close to the number of U.S. gun deaths each year. With statistics that show toddlers accidentally shoot people every week of the year — for the past two years, no less — it's not entirely out of line to say that gun culture is so accessible in the United States that even a child can get into it. The issue of gun safety in America is not about taking anyone's guns. It's about keeping the guns that are out there out of the hands of children and people who shouldn't have them. What's strange is that the National Rifle Association claims that our laws already do that. Why then, are statistics like these so alarmingly high?

The National Rifle Association has apparently even tried to prevent or change the issue of children having unsecured access to firearms in the home, with the help of "Eddie Eagle," the Tony the Tiger of gun ownership. "Stop! Don’t touch," touts Eddie. "Run away. Tell a grownup." If there's one method that has worked as unsuccessfully with my toddler as any, it's telling them to stop — or, even better, expecting them to just stop on their own. The NRA did not immediately return Romper's request for comment.

Let's put aside for a moment the entire issue of gun reform in America. Whether you believe there are too many guns in this country, or every American has a God-given right to purchase and carry a firearm — or not — is beside the point. Toddlers are shooting — and killing — both other people and themselves. Toddlers accidentally shooting someone else or themselves has happened every week for the past two years. That means there are at least 104 different stories of tragedy that could have been prevented. Toddlers have accidentally killed siblings with guns, killed their own parents, and even have accidentally shot and killed themselves due to unsecured firearms in the home.

This is beyond a major problem: this is an epidemic — and it has to stop. Toddlers should never have access to guns. The popular pro-gun owner argument is that all gun owners are safe, responsible gun owners and that no one has the right to infringe on anyone's Second Amendment rights. The NRA has actively lobbied against legislation that would restrict gun owners' rights. Apparently, this includes any legislation that would hold parents responsible if their children shoot someone with a gun that was unsecured in their home — like MaKayla's Law in Tennessee, which the NRA successfully lobbied against to prevent its passage. In an NRA legislative action alert about MaKayla's law on their website, the NRA told members:

If anti-gun legislators were serious about keeping kids safe, they would know that the key to reducing firearm accidents isn't about prosecuting after the fact, it's about educating children and parents about the safe use of firearms.

Education and training programs don't keep guns out of toddlers' hands. They are toddlers. Many of them are barely learning to tie their shoes. The data is there and can't be denied: If more gun owners were actually responsible about the safe storage of their guns, we wouldn't have toddlers shooting someone every week for the last two years. But if toddlers are to be safest, there shouldn't be any guns in the home at all. Even the American Academy of Pediatrics states this as their number one guideline about preventing firearm-related deaths and injuries in children:

The AAP affirms that the most effective measure to prevent suicide, homicide, and unintentional firearm-related injuries to children and adolescents is the absence of guns from homes and communities.

And if there are guns in the home, which is an American citizens' right, then that gun owner should be held legally responsible for any unauthorized use of their firearm by someone who shouldn't be using it — especially children.

So far, there have been 165 gun deaths in the United States this year, according to the Gun Violence Archive online — and we're only five days into 2017.