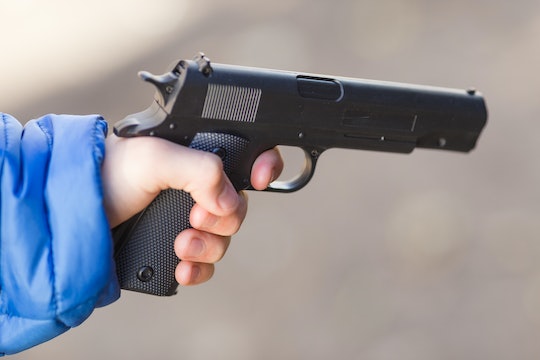 A Toddler Reportedly Shot Her Pregnant Mom, & It's A Terrifying Example Of Why We Need Gun Reform

As unsettling as it may be, many young children in America have easy access to firearms due to lax gun storage laws. Want proof? Sixty-one kids have been involved in unintentional shootings in 2018 so far, according to Everytown for Gun Safety. And unfortunately, that number increased on Tuesday after a toddler in Indiana reportedly shot her pregnant mom in the shoulder. Although everyone involved in the incident is doing OK, the shooting is a reminder that many states in America need to improve their gun storage laws ASAP.

A 21-year-old mother named Shaneque Thomas was shot in her upper right shoulder by her 3-year-old daughter on Tuesday afternoon while running errands in Merrillville, Indiana, according to Newsweek. The terrifying incident occurred because the girl's father, Menzo Brazier, reportedly left a loaded 9mm handgun between the console and the front passenger seat of the family's vehicle, authorities claim, according to NBC Chicago. When Brazier exited the car, the toddler accidentally shot Thomas — who is six weeks pregnant — in the upper right part of her shoulder, according to AOL.

Employees in the shopping center where the shooting took place described an upsetting scene to reporters. “There was blood flowing all from her stomach," Hadassah Zirkle, an eye-witness said about Thomas' injuries, according to the Daily Mail. "Just coming out like water, like a faucet and I screamed someone call 911.”

As for the toddler, she was understandably terrified by the events. “The poor little girl had blood on her jacket," Zirkle added, according to the Daily Mail. "Just looking at me, caressing my neck just holding on to me. I was telling her it was OK."

Thankfully, Thomas and her unborn child are in stable condition following the shooting, according to HuffPost.

In terms of legal ramifications, Brazier is facing child endangerment charges and the couple's two children have been placed with the Indiana Department of Child Services. Authorities in Merrillville did not immediately respond to Romper’s request for comment.

Of course, this incident should have never happened — a sentiment Merrillville Police Chief Joe Petruch touched on in a press conference about the matter. Petruch stated, according to Newsweek:

Where [the gun] was placed was an unsecure location, it should never have happened. He should have locked it in the truck, it should have been unloaded. When you’re playing with guns in front of children, they pick up how to load a gun, how to fire a gun. They think it’s a toy, and I’m sure that’s what this 3-year-old picked up. This doesn’t happen overnight.

Although Petruch was right to say that the gun should have been in a secure location," he failed to touch on the laws in Indiana that make it easy for an incident like this one to take place. Although Brazier's gun was legally obtained, according to Newsweek, you don't need a license to own a firearm in Indiana. As for gun laws pertaining to vehicles, the state allows people to carry loaded guns in their cars if they have a license. And in 2014, then-Gov. Mike Pence signed a bill to allow guns in school parking lots. The only stipulation in the bill is that the guns remain "hidden" and in the parking lot. What could go wrong, right?

But Indiana isn't the only state that has some work to do when it comes to gun storage laws. In Texas, for instance, there are "no laws regarding the carrying of long guns (rifles or shotguns) in motor vehicles," and the state "does not require a person to have a valid handgun license in order to carry a loaded handgun in a motor vehicle," according to Giffords Law Canter. Essentially, Texas doesn't have many laws outlining rules for gun storage outside of the home.

An area like Washington, D.C., on the other hand, has strict laws when it comes to gun storage outside of the home. If you are driving with a gun in D.C., it must be unloaded and it can't be accessible from the passenger compartment. Additionally, "if the vehicle does not have a compartment separate from the driver’s compartment, the firearm and ammunition must be contained in a locked container other than the glove compartment or console," according to Giffords Law Center. It goes without saying that these stipulations makes it more difficult for a child to get their hands on a gun.

Outside of safe gun storage in cars, there's the issue of proper gun storage inside the home. Shockingly, Massachusetts is the only state that requires that all firearms be stored with a lock in place. Additionally, the states of California, Connecticut, and New York all require that guns be stored securely around people who are underage. Of course, one has to wonder why other states haven't taken similar measures when it has been proven that these laws save lives.

And lastly: when minors or unauthorized people access someone's weapon, in many cases, those "responsible gun owners" aren't held accountable. If a gun isn't properly stored, its owner should be charged with a crime, even if someone didn't end up hurt or dead. Unfortunately, not many states have laws against negligent storage — even if an accident occurs.

And to those who might argue that gun storage isn't a big deal, the statistics say otherwise. A study conducted between 2012 to 2014 found that on average, 5,790 children in America "receive medical treatment in an emergency room each year for a gun-related injury," and about 21 percent of those injuries are unintentional, according to CNN. Clearly, America has a big problem when it comes to safe gun storage. The good news, however, is that lawmakers can intervene to improve gun storage laws — something that should happen sooner than later.