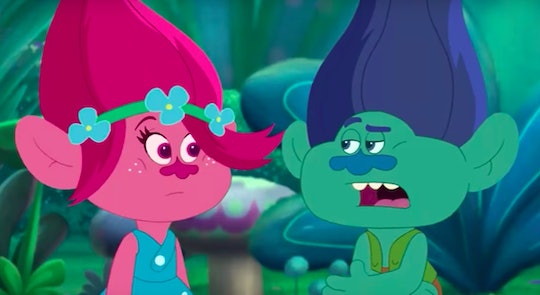 Thank goodness for Netflix. Without it, both parents and their children would equally suffer from a serious lack of constant entertainment. If you have a Netflix subscription, then you know how addictive the streaming platform's original series can be (I'm looking at you, Orange Is The New Black). But now your child can become addicted to an age-appropriate series, too — because it's been announced that a Trolls series is coming to Netflix, inspiring a whole new generation of binge-watchers.

Parents are probably already familiar with Trolls, the movie which reintroduced those beloved crazy colored haired dolls from their childhood into their home in 2016. The film, which introduced the world to the very catchy song, "Can't Stop The Feeling" by Justin Timberlake, has been available to stream on the Netflix since June, according to The Hollywood Reporter. But in nine days, the new series inspired by the movie will be available to stream on Netflix.

The upcoming series, Trolls: The Beat Goes On, debuts on Netflix on Jan. 19 and the show's description sounds super entertaining for the younger crowd. The series, according to Netflix, picks up where the movie left off and is about Queen Poppy, who is "trying to keep Troll Village's peace with the Bergens by inviting them to parties, playing their sports, and visiting their town." If this does not sound like the most exciting new Netflix series, then the trailer for the series might entice you more.

So the new series doesn't feature the voices of your favorite actors who lent their voices to the first film (like Anna Kendrick or James Corden), or have the same kind of animation as the film, but the trailer to the new series pretty much guarantees that it will be just exciting as the first film. Without revealing too much about the new series' plot, the trailer shows that there will be a lot more singing, dancing, and troll hair to go around. If "Can't Stop The Feeling" played in your house for too long, there will also be new songs to become addicted to in this new Netflix series. Trolls: The Beat Goes On has a soundtrack with the same title available to pre-order on iTunes with six new songs straight from the series.

This isn't the first time that Netflix debuted some new Trolls content. Over the holiday season, Netflix released Trolls Holiday, which featured those super cute Trolls characters finding a way to spread holiday cheer by creating a new holiday, according to Good Housekeeping. But if you're starting to get sick of seeing snow, both on screen and in real life, then this new Trolls Netflix series will be the perfect new addition to your TV or computer screen. A sneak peek for the new series shows that this new addition to the Trolls family will be snow free.

This new Trolls series isn't the only exciting new kid-appropriate content to come to Netflix this new year. In December, Netflix announced that a new Boss Baby series and Captain Underpants movie sequel, among others, would be debuting in 2018. There goes that resolution to reduce children's screen time in the new year.

Really, this new Trolls series could not come at a more perfect time, especially since it was announced last year that the sequel to the original Trolls film won't debut until April 10, 2020, according to Variety. That is two more years without any new Trolls content and two more years of having to watch the first Trolls film over and over again. At least this new Trolls series will provide another option for parents and their kids while still giving them the same cute characters and fun songs, just in a new animated format. It's never too early to teach children just how fun binge-watching their favorite Netflix series can be.