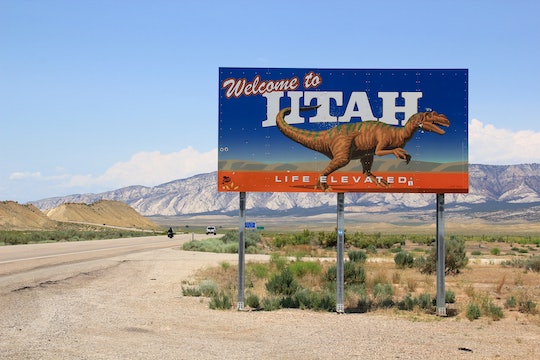 A Utah Judge Thought It Was OK To Make Same-Sex Parents Give Up Their Child, Ignoring The Most Important Parenting Rule Of All

On Tuesday, a state judge reminded Americans that, Supreme Court or not, same-gender couples aren't equal under the law. He ordered that a Utah same-sex couple give up their foster child because they're lesbians, only to go back on his ruling less than a week later. April Hoagland and Beckie Peirce may be married, but in the initial judgment of Judge Scott Johansen, the two are unfit parents for their 1-year-old foster daughter — despite the fact that Baby Doe's own mother was encouraging the couple to adopt. In his original justification for ordering the girl to be taken away from her parents, the judge cited "research," according to those present in the courtroom, but what does science really have to say on the subject of same-gender parenting?

There's an enduring conservative myth that children of same-sex partnerships are at an inherent disadvantage, presumably due to being exposed to the horrors of homosexuality so early in life — conservatives argue that children in such households will experience gender confusion, difficulty in social relationships, and poor educational outcomes. Many people continue to believe that science is on their side when it comes to notions about same-gender parenting, which is peculiar given that science really, really isn't. If anything, it comes out strongly in support of children from same-gender families, and some studies even suggest that children from such partnerships have better outcomes when it comes to certain measures of success. Along indicators like emotional regulation and balance, some children with same-gender parents seem happier and healthier.

While anecdotes are not data, there's also ample evidence all around us that same-gender parents head up happy, healthy households that turn out great children, whether they be celebrities raising children or ordinary people devoted to the welfare of their kids. In a society with a growing number of same-gender parents, many people are getting to know these parents and their children, and their overarching characteristic is that they're utterly unremarkable, with no real differences between them and heterosexual couples.

Even Hillary Clinton weighed in on the situation, saying:

The Tuesday, November 10 ruling ordering that the 9-month-old baby be removed from her home and placed with a heterosexual couple hasn't been made available to the public, but Peirce and Hoagland have spoken out about its contents and court clerks have confirmed their comments. Romper reached out to the Utah Department of Child and Family Services but hadn't heard back at the time of publication.

He said he has research to back that children do better in heterosexual homes.

Research or not, parent sexual orientation isn't something judges are asked to consider when evaluating adoption applications. Utah's laws regarding foster care and adoption state only that couples applying for adoption be married, making no mention of sexual orientation, and even the state's governor is confused by the ruling.

"He may not like the law, but he should follow the law. We don’t want to have activism on the bench in any way, shape or form," Governor Gary Herbert stated after the initial decision, saying the judge shouldn't "inject his own personal beliefs and feelings in superseding the law." Herbert, a Republican, is hardly liberal, but clearly believes it's still important to follow legal guidance.

On Friday, November 12, Judge Johansen reversed his original ruling. According to the New York Times, Johansan removed a line that read "it is not in the best interest of children to be raised by same-sex couples," and though it's unclear why the judge changed his decision, it's likely that public outcry and media attention were contributing factors. However, also noted by the NYT is the fact that a sentence still appears in the ruling that reads: "The court cited a concern that research has shown that children are more emotionally and mentally stable when raised by a mother and a father in the same home."

But the law is clear on requirements for foster parents, and there's a pressing need for them, too. So it's entirely problematic that a state judge was able to confidently cite "research" in his ruling without requiring factual documentation of such. There are nearly 400,000 children in foster care in the U.S. at the moment waiting for placement in loving homes, and the United States can't afford to discriminate on the basis of sexual orientation. Nor should it, since it's not a factor in the health and wellbeing of children.

Certainly the American Academy of Pediatrics, a well-respected authority on children and families, supports same-gender adoption, and has for a very long time. In its statement supporting children from all kinds of families, it states:

Children’s well-being is affected much more by their relationships with their parents, their parents’ sense of competence and security, and the presence of social and economic support for the family than by the gender or the sexual orientation of their parents.

The organization comes down firmly on the side of keeping children in their family units, when possible, and when not, placing them in loving foster and adoption situations like the one Hoagland and Peirce were providing before it was so rudely disrupted.

As many as nine million children in the United States are living in same-gender households, though it's actually quite difficult to pin down exact numbers on the subject. Many parents are reluctant to come forward to identify themselves, fearing homophobic responses. Including, appropriately enough, having their children taken from them on the grounds that their gender and sexual orientation make them unfit parents. This includes not just foster parents or those applying to adopt, as Hoagland and Peirce were, but also parents seeking custody after divorce. As this case demonstrates, that's a legitimate fear.

Conservatives are swift to say that children from same-sex families experience worse outcomes — popular thinktank the Heritage Foundation argues that children from such family dynamics end up more reliant on social services, for example. They cite dubious studies claiming differences between same-gender and different-gender households, in direct defiance of substantial scientific literature. But they're dead wrong.

In a study that came out in September, researchers jimi adams and Ryan Light from the University of Colorado, Denver, and the University of Oregon, Eugene, respectively, found that the overwhelming consensus on kidrearing was quite clear. There aren't any differences between children from same-gender or different-gender marriages when controlled for other factors. Columbia's law school drilled even deeper, looking at 77 different studies on the subject and finding almost unanimous consensus in support of the "no differences" finding. Four of the studies the researchers examined looked at children in divorcing families, which means that those using those studies are picking and choosing for poor outcomes in an apples and oranges comparison. We already know that "family disruption" can create stress for children, and it's a factor that should be controlled for in studies about parenting.

Here's where things get interesting. When researchers balance out other factors — a necessity in the social sciences, where researchers need to consider whether things like race, class, or disability status might have an influence on their results — another overwhelming finding develops. In cases where heterosexual couples do demonstrate an advantage, the issue isn't the gender of the parents in the relationship, but their socioeconomic status. Same-gender couples are more likely to have a lower socioeconomic status due to homophobia, and in some cases also transphobia. Children in same-gender families are also twice as likely to live in poverty, for example.

Same-gender parenting isn't hard because of a gender problem. It's hard because of a discrimination problem, and those interested in promoting the welfare of children — which I devoutly hope is everyone — should be more concerned about the achievement gaps that keep same-gender couples at a social disadvantage.

Same-gender parents experience wage and hiring discrimination, housing discrimination, inequalities in health care access, and other social barriers. Eliminating these barriers helps their children succeed, and ensures healthy outcomes like those seen in studies between parents of comparable backgrounds.

Children from socioeconomically disadvantaged backgrounds — regardless to the gender of their parents — have poorer outcomes. It's one reason that issues like family stability, incomes, and housing are important considerations in custody and adoption proceedings, as the state has a duty of care when it comes to providing children with the best possible chances in life. Yet conservatives cling to the myth that gay and lesbian parents are the problem, rather than addressing the fact that poverty and low social status are to blame, and that their discriminatory attitudes are only compounding matters.

Judge Johansen has made some other troubling and bizarre legal decisions which would support Peirce's claim that his religious values played a role in his ruling. In cases involving teenage offenders, he's taken actions like ordering a girl to submit to having her ponytail cut off in court. His enthusiastic approach to excessive justice would seem to suggest that he may have a "spare the rod, spoil the child" approach to parenting, paired with an extremely conservative and absolutist stance on "traditional families." Given that, it's probably not surprising that he relied on some handwavey science to take a baby away from her moms.

Let's hope that in this case, justice will prevail, but it's raising a larger point. Instances like these arise on a depressingly regular basis and the United States needs clear federal caselaw to draw upon in such matters, making it unequivocal that same-gender parents have a right to form families. A handful of rulings already explore the subject, like United States v. Windsor, in which the Supreme Court strongly suggested that discriminating against children of same-gender parents could breach the Constitution, and Oberfell v. Hodges, in which the court explicitly affirmed same-gender parenting rights.

At this point, the opinion of the Supreme Court favors parenting rights for all — it's activist judges like Johansen who are bucking the winds of change.

A score of amicus briefs have already drawn hundreds of studies about same-gender parenting, but culture, and the legal system, have yet to get the message: Claims about depravity and terrible outcomes for children are outdated, and love is the most important factor in what makes a family.