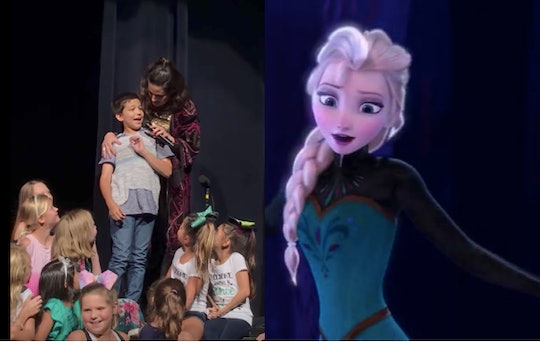 It has been four years since Frozen hit the big screen (can you believe it?) but the film is still wildly popular with kids today. It doesn't feel like that long ago when everyone was introduced to Elsa, Ana, and "Let It Go" was permanently put into everyone's heads. If your heart is frozen, or if your heart is still stuck on Frozen, a video of this little boy singing "Let It Go" will definitely melt it into a puddle.

Idina Menzel, or Elsa in real life, is currently on tour, entertaining audiences all across the nation by singing songs from Broadway shows, including the show tunes that made her famous. "Let It Go" is undoubtably Menzel's most popular song and one that is hard to stop kids from singing along to. So each night during her tour, instead of silencing those kids, Menzel invites them up on stage to sing the song's chorus with her.

During a recent tour stop in Grand Prairie, Texas, Menzel did that exact thing — invite kids to sing the chorus of "Let It Go" with her. But this time, one child stopped her in her tracks — an 11-year-old boy named Luke, according to E!. In the clip, captured by a concert goer, Menzel remarks that most young boys who come to her show don't like "Let It Go." "Every time a boy comes up, he tells me he doesn't really like this song," Menzel told Luke in the clip.

But Luke definitely proved Menzel wrong — both with the fact that he liked "Let It Go" and can seriously sing the song (maybe even better then Menzel?). The little boy begins his rendition at 1:25 in this video clip, posted to YouTube, and it is definitely worth watching. You will be blown away by his performance.

At his young age, Luke certainly has a huge future ahead of him. After the show, he told E! News, saying that singing with Menzel was a "dream:"

...I certainly didn't expect that she would ever really ask me to come on stage and sing with her. It was a great experience. Idina was very kind to my mom, my sister Halle, and me.

But Menzel shouldn't be surprised that Luke enjoyed "Let It Go" or Frozen. Frozen is one of the highest grossing films of all time and continue to sells merchandise geared towards all genders (even if Fox News claimed that Frozen was a "threat to masculinity" in 2015). The song's message, of getting rid of the past and moving on without a care about what other people think, resonates with everyone who listens.

Luke's voice, along with the song's message is as powerful as Queen Elsa herself.