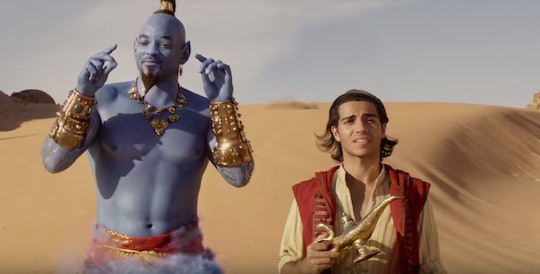 There is a lot riding on Disney's live-action remake of the 92' animated film, Aladdin. People have so many memories attached to the cartoon that it's impossible to please everyone. But, they might be happily surprised by the film's newest commercial. After seeing "A Whole New World" in Disney's new Aladdin, people should be pleasantly surprised by how amazing it

In exactly one month from today, Disney's new remake of Aladdin will hit theaters, according to Collider. This means the countdown to seeing the film is officially on, indeed it will be here before you can say "Agrabah" (that's the fictional city where Aladdin and Princess Jasmine live in, in case you needed a refresher).

For those who can't wait for Friday, May 24, Disney's newest Aladdin commercial should certainly do the trick. Earlier this week, a new TV spot for the movie debuted just in time to get fans excited for the film, and it works. In the new commercial, people get to see more of the gorgeous setting, get a glimpse of Aladdin and Jasmine's incredible chemistry, and hear the movie's version of "A Whole New World" for the first time.

Let's just say, their version of the song is good.

If the music wasn't impressive, then the animation and setting will set people over the edge. The movie looks so grand on so many levels that epic doesn't even begin to describe it. But there is so many aspects about this film that people haven't seen.

The live action film will feature brand new characters like Hakim, who is the right-hand-man of Jafar (the villain in the film), and Mara, Jasmine's loyal handmaiden, according to Den of Geek! Basically, it sounds like the new film will go a lot deeper into Aladdin and Jasmine's world (and love story) than the 1992 film did — and that's a very good thing.

Especially since Jasmine is reportedly going to be a lot more "real" (quite literally) than the animated version. 25-year-old actress, Naomi Scott, stepped into Jasmine's shoes for the role and explained to Entertainment Weekly last year that she has a renewed perspective on Jasmine.

"Jasmine's main objective at the beginning is to really protect her people and to do right by them," she said. "She definitely isn't a finished article at the beginning of the movie, but she has this beautiful arc and progression, and she goes from asking for what she wants to just taking it, and displaying that she is a leader."

She's "a more rounded character and maybe not being such a stereotype of the time," the film's director, Guy Ritchie, explained to Entertainment Weekly.

But this isn't to say that all of the changes to the film have been been entirely well received. Fans were upset when the original rendering of the Genie, played by Will Smith, didn't have him colored blue like the cartoon did, according to Screen Rant. But, long time Aladdin fans should be pleased with Smith's take on the character.

"I like that our Genie has an ego and is a little bit vain and he cares how he's presented because he's been doing this for a very long time," Ritchie told Entertainment Weekly.

From "A Whole New World" to the new take on old characters, both old and new audiences alike will probably fall in love with the live action version of Aladdin.

More Like This
Disney Drops Strange World Trailer, A New Sci-Fi Movie About A Family Of Explorers
Disney's Upcoming Mufasa Movie Will Tell Us The Origin Story Of Simba's Dad
Little Black Girls Are In Awe Of Halle Bailey In The Little Mermaid
Disney Will Introduce Us To A New Heroine Named Asha In The Animated Movie Wish