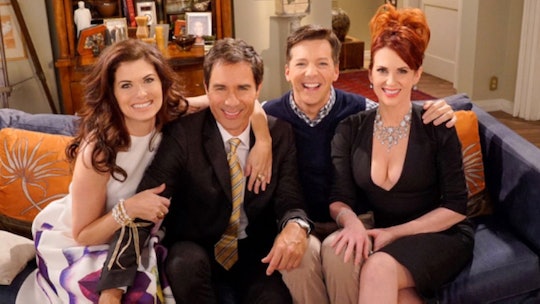 More ‘Will & Grace’ Is Officially Coming Your Way!

If you thought today was just going to be a regular Wednesday then think again. Because it was also the day that NBC chose to announce that a Will & Grace revival is officially happening! After months of speculation and reported rumors, it turns out that our favorite cast of characters will be back on our small screens in no time. According to TVLine, the reboot has been given a 10-episode order by the network, which will air sometime during the 2017-18 TV season. Someone please pinch me because this can't possibly be real! And yet, it very much is. (Also, please don't actually pinch me. I bruise easy.)

And even though I'm sure this kinda goes without saying, but just to ease any of your concerns, it's also been confirmed that all four of the show's original main stars — Eric McCormack, Debra Messing, Megan Mullally, and Sean Hayes — will all be back to reprise their beloved roles. But really, are we that surprised? I mean, what would a Will & Grace reunion be without any one of these unforgettable characters? Obviously, there is no Will & Grace without Will and Grace, but I'd argue that it's equally important to have both Karen and Jack there as well. And thankfully for us, that's exactly what's going to happen!

However, the good news doesn't just end there. It's also worth mentioning that James Burrows, who was the directing mastermind behind the scenes of every single Will & Grace episode during its original eight-season-long run, will also be in charge of these new episodes as well. So you can expect to laugh just as hard and love this new installment just as much as the original sitcom.

"We’re thrilled that one of the smartest, funniest, and most defining comedies in NBC history is coming back," NBC Entertainment Chairman Robert Greenblatt said in a statement about the Will & Grace revival. "This groundbreaking series for everything from gay rights to social and political commentary — all disguised as a high-speed train of witty pop culture — is coming back where it belongs."

Rumors of an official series reboot started really picking up speed back in September when the gang reunited for a 10-minute long segment that centered around one of the most talked about topics of the year: the presidential election. Fans immediately wanted more from these characters and hoped this was a tease of more to come. And now, as this news now proves, that was entirely the case. I can't wait to see what the cast and creators have in store.