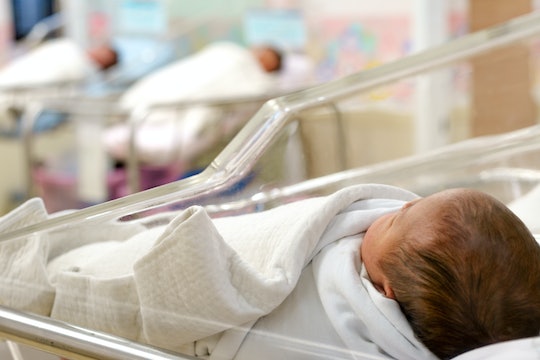 If you're pregnant, maybe this isn't the best time to read this, but last week in Colombia, a woman gave birth to a 14-pound baby, which is roughly twice the size of the average newborn. If your uterus is currently recoiling in horror, I'm super sorry, but you need to know that this is very unusual, and most expectant moms will never have to worry about birthing a child the size of a 6-month-old. According to The Sun, Diana Machacon and Jonathan Guerra welcomed Isaac David Guerra on Dec. 2 in Magdalena. The boy weighed in at about 14.1 pounds and was 21.5 inches long.

"I really did not expect him to be this big," Machacon was quoted as saying. "I mean, he looked big on the ultrasound scan, but I never imagined quite so large." Machacon's OB-GYN, Ana Maria Rivera Casas, told The Sun that Isaac was born via C-section (thank goodness), and that there were no complications, other than a few hypoglycemic episodes, which is to be expected with a newborn of that size. The baby is now reportedly doing well, and he's breastfeeding seven times a day, which is actually less often than a typical breastfed newborn, so at least that poor woman has one thing going for her.

Isaac isn't the first giant baby in recent headlines; in June, South Carolina couple Cindy Richmond and Arthur Keisler welcomed their third child, Colin Austin Keisler, another 14-pound baby. The couple's first two kids weighed 7 pounds, 6 ounces, and 9 pounds, 8 ounces at birth. Colin was also delivered via C-section, a week before his due date. Witness Donna Hinton told ABC News, "I have been an obstetrics nurse for 29 years, and I have never seen a 14-pound baby born before." Richmond said Colin was estimated to be about 10 to 11 pounds at her last doctor visit three weeks earlier. No underlying medical cause was found for the baby's size; his father told ABC, "He's just naturally big."

In Australia in January, Melbourne residents Natashia Corrigan and Brian Liddle welcomed Brian Junior, who weighed 13 pounds, 4 ounces. He was clocking in at about 9 pounds at 36 weeks, according to Yahoo, and arrived five days late. His older sisters were born at a perfectly normal 8 pounds, 4 ounces and 7 pounds, 12 ounces. Incredibly, Corrigan did not have a C-section; she told Yahoo that "the birth was natural and I only had gas." She credits the "power of positive thinking" for getting her through the ordeal, and advises future moms, "be positive, breath deep." I don't know about you, but my lungs simply don't go deep enough to overcome that.

Like Richmond and Corrigan, Machacon had two previous births; the Columbian newspaper El Heraldo reported that her first child, delivered vaginally, was 8 pounds at birth, and the second, via C-section, was about 9-and-a-half. Isaac is now in the neonatal intensive care unit in stable condition, and his mom is healthy, although Radio Carcol reported that she did present with untreated gestational diabetes, which likely led to the baby's condition.

So what have we learned? First of all, it's important to have good prenatal care, as gestational diabetes is manageable (and largely preventable) with medical intervention. Second, a fetus can pack on a pound per week during the third trimester, so at the 36-week appointment, you'll have some advance warning, at least. And third, you can give birth to two babies of average or slightly above average size and still end up gestating a half-giant for your third, so maybe stick to two if you're not down with that. But if you're brave enough to handle the fleeting pain, pushing out a watermelon with limbs will not actually ruin you vagina, so go for it. Better you than me.