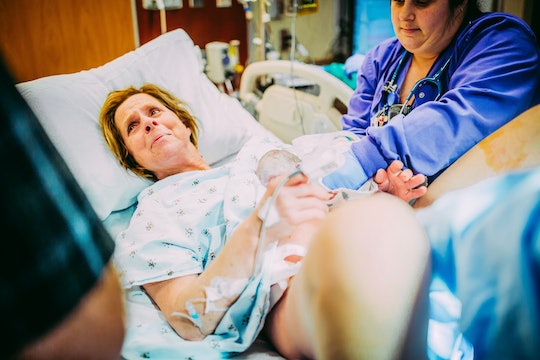 A Woman Just Gave Birth To Her Own Granddaughter, & The Photos Are Phenomenal

When it comes to having a child, the logistics can get a bit complicated for gay couples — especially for gay men. A gestational carrier is needed, for one, assuming they're not adopting. And while plenty of couples end up going with a surrogate they didn't know prior to the pregnancy, the intended parents can be much more involved if a family member or friend is up for the job. However, it's pretty rare for that person to be the mother of one half of the couple. As it turns out, a woman just gave birth to her own granddaughter — and the photos are honestly amazing.

Nebraska couple Matthew Eledge, 32, and Elliot Dougherty, 29, began considering IVF to start their family about two years ago, according to Buzzfeed News. Matthew's mother, Cecile, offered to be their surrogate — something they didn't seriously consider as a valid possibility at the time. “If you want me to be the gestational carrier,” she told Matthew, according to Buzzfeed. “I’d do it in a heartbeat.”

It wasn't until Matthew and Elliot met with a reproductive endocrinologist that they learned Cecile's offer was actually possible, according to the New York Post. Because although Cecile had last given birth more than 30 years ago and had already gone through menopause 10 years ago, according to the Daily Mail, she could still theoretically carry a pregnancy. She underwent a battery of tests, and was given the green light be doctors to start the process, which included taking hormones. Even more remarkable? Elliot's sister, Lea Yribe, offered to donate her eggs to them.

During the pregnancy, all parties involved understandably fielded plenty of questions. “People are confused, which is normal. We got a lot of people being like, ‘wait a minute, whose egg? And whose sperm?” Matthew told the New York Post. “As gay men, we’re so lucky to be having children at a time when people are actually celebratory of our relationship and of us being parents, and also at a time when technology allows us to have this baby, with some of Elliot’s genetic material and some of my genetic material.”

Cecile's pregnancy included severe morning sickness and blood pressure spikes. She told Buzzfeed News that whenever she was having a particularly rough time during the pregnancy, she thought, "Wait for the day I hand them their baby, their precious gem. It will be so worth it."

On Monday, March 25, Cecile — at age 61 — delivered her own granddaughter. The family welcomed a healthy baby girl named Uma, according to the Daily Mail. And photographer Ariel Panowicz was there to capture the powerful birth.

Impressively, Cecile was able to deliver her naturally without medication.

Clearly, they are so in love with their baby girl.

"The whole experience behind it all has been so special," Matthew told the Daily Mail. 'The acts of kindness that went into this all, and all of the support has been truly humbling."

Granted, this isn't the first time a grandmother has given birth to her own grandchild. But the fact that so many members of Matthew and Elliot's families were able to come together to make their daughter's existence a possibility is nothing short of amazing. One thing's for sure: Baby Uma is so incredibly loved. And she'll grow up with an aunt and a grandma who have extra-special connections to her. Congrats, to the whole family on their precious new addition!

More Like This
This Is How Your Water Breaks During A C-Section
The FDA Is Warning Parents To Not Use Baby Neck Floats After One Infant Died
Can You Do Zumba While Pregnant? Experts Weigh In
Pitocin Induction: What It Is & The Play-By-Play