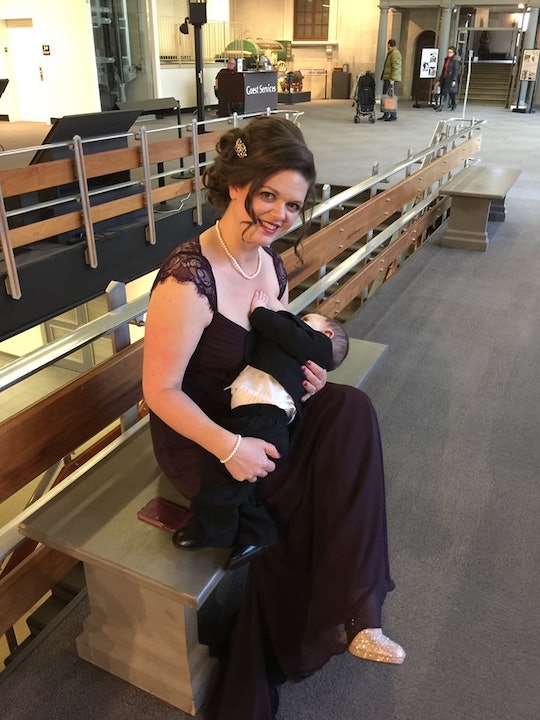 When Pittsburgh mother of three Emily Locke attended her sister's wedding at Cleveland's Western Reserve Historical Society this past weekend, she probably didn't plan on becoming a "lactivist," but now she's become an Internet hero to moms everywhere. That's because when museum employees tried to stop her from breastfeeding her son, she refused to back down, and then took them down with an epic Facebook post.

Locke explained in her post that when she and her 9-month-old son stepped away from a family photo session for a feeding, she was soon approached by a (female!) staff member who told her that she wasn't "allowed to do that." Locke then told the woman that yes, legally, she most certainly was, and the woman cited museum policy, then threatened to get her manager. Locke wasn't having it, and the manager showed up and asked her to move to a "private area." What ensued was absolutely bonkers: the manager argued that it was a "family museum," to which Locke replied, "this is a family moment." Then the manager actually said that she was "just trying to protect the innocent children." As absurd as that statement is on its face, it's even more outrageous when you take into account that the only children in the area were Locke's two older kids.

Speechless, Locke just stared at the manager until she finally gave up and walked away. She won that battle, but the war's not over, so she took to Facebook to express her disappointment that such a policy (and an illegal one, at that) would even exist:

I was so disappointed and saddened by this. I was treated as if I was doing something disgusting and inappropriate. That I was in some way hurting the innocence of children. I was treated this way by women in a museum which actually has exhibits celebrating the civil rights movement, and women's rights. A museum that has nude female form on display as art, but could not see the art and beauty of a woman nursing her child. Mostly though, it concerned me that they believe it is okay to have a policy against nursing. That they would so aggressively try to stop me.

She urged the museum to change its anti-breastfeeding policy, if it did indeed exist, and shared a photo of herself in her wedding finery with her son latched on in his adorable little tuxedo, which of course was anything but indecent. After being inundated with angry comments on their own Facebook page, the Cleveland History Center released a statement on Tuesday:

We were made aware that, last weekend, a breastfeeding mother was asked to move to a private space by members of our Cleveland History Center staff. This reflects poor judgment on our part, for which we are truly sorry. We have formally apologized to the mother, and are immediately implementing additional training for our entire team in order to ensure that an incident like this does not happen in the future. The Western Reserve Historical Society strives to be an inclusive, family-friendly organization that provides a welcoming environment for all our of patrons, including breastfeeding mothers. We did not live up to that goal in this instance.

All the high fives for Emily Locke! Her refusal to comply with a prudish and unjust policy was badass enough, but going one step further and calling out the staff will now ensure that no other family who visits the museum will be made to feel indecent simply for feeding their babies. Well done, madam.