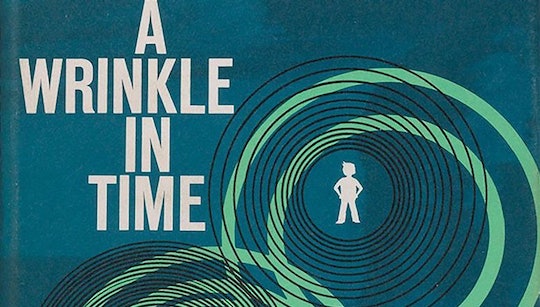 'A Wrinkle In Time' Changed My Life As A Kid

There is one part from Madeleine L'Engle's 1962 sci-fi-slash-fantasy novel A Wrinkle in Time I could never get out of my head. In keeping with the theme of the book, it's been firmly implanted in my brain since I first read the book as a fifth grader.

I'll try to avoid spoilers, here, but the heroine, Meg, realizes there is one thing she has that the book's mind-controlling antagonist, "It," doesn't have. She has to try to use this thing to rescue her little brother, Charles Wallace, from It's clutches.

I have a younger brother just like Meg did, and L'Engle's focus on the connection between siblings and parents and children over a romance spoke to me loud and clearly at that time. Not to mention, the sheer otherworldliness of the story bent my preteen mind.

It also didn't hurt that the heroine was 13, just a few years older than me at the time. And she. was. kicking. ass. The A Wrinkle In Time movie based on the book that comes out today is all the buzz right now, but I feel like that story belongs to me. Because A Wrinkle In Time changed my life.

You weren't anybody unless you had the other half of the best friend necklace.

My fifth grade year was a rough one as pre-teen years go. I was in a friendship triangle where another girl and I constantly fought over who was best friends with a third girl. Because you weren't anybody unless you had the other half of the best-friend necklace. Fifth grade was the one school year I didn't get Student of the Month, because I was constantly fighting with my friends.

I was right at the cusp of my angsty teen years, but still clinging to the comfort of my childhood.

I dreamed of being an anthropologist, but mostly just wanted to be liked at school and to rock out to NKOTB's "Step by Step" and eat Twizzlers from the school candy sale.

My fifth grade teacher suggested I read A Wrinkle In Time. She was the first person to every really notice my over-active imagination and aptitude for writing. Once I started reading it, I couldn't put it down. The book tells Meg's story as she goes on a journey through time and space to rescue her missing scientist father. She is joined on the adventure by her little brother, Charles Wallace, and her friend that's a snack, Calvin O'Keefe.

Meg is led on her journey by Mrs. Whatsit, Mrs. Who and Mrs. Which.

The story is so magical, so far from reality, but so smart, that I was utterly inspired. Meg made me believe that young people can do big things. She showed me that science was cool. She gave me hope I could get the boy. (I didn't, but dammit, I had hope.) The book showed me that love is the most important of all.

It was OK that I had my frenemy love/hate triangle. That I was going through some things. Even Meg experiences her in and outs with Charles Wallace and Calvin on their journey.

But the real effect of the book was that I started to dream well beyond my preteen universe of snap bracelets and boys. I was fascinated that a world as rich and complex and as far out there as the one in A Wrinkle In Time could come from a writer's imagination.

I made it a point from then on out to love my family and friends unselfconsciously and with my whole heart, just like Meg.

I started to see my own life and potential without limits. There's a quote in the book from Mrs. Whatsit that speaks to the power and responsibility we have in our own lives:

“Life, with its rules, its obligations, and its freedoms, is like a sonnet: You're given the form, but you have to write the sonnet yourself."

I took the advice to heart: I let go of my creative limits, and became a writer and a thinker and a lover unbounded by shame or expectations, just like Madeleine L'Engle when she wrote A Wrinkle In Time. I took ownership of my life and committed to writing my own "sonnet".

I made it a point from then on out to love my family and friends unselfconsciously and with my whole heart, just like Meg. My brother and I live several hours apart as adults, and are now both married with kids, but we are still close in our goofy, special way. We are tight-knit with our younger sister as well, and our parents. We don't end a phone call without and "I love you" if we can help it.

I'm looking forward to seeing A Wrinkle In Time in the movie theater, even though I worry, as is often the case with movies inspired by books, that it wont do the book justice. In reading books, we picture the words however we choose, and movies don't give us this luxury. But, I look forward to the movie bringing attention to the story and maybe even the book.

To this day, when someone asks what my favorite book is, I answer A Wrinkle In Time. Sure, it's a kid's book, but it's the best. Life-changing, even.