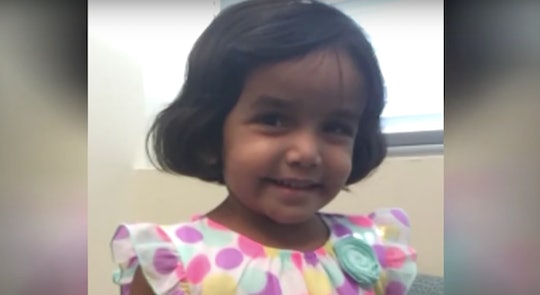 A Dad Made His Young Daughter Stand Outside As Punishment. Then, She Disappeared.

Parenting a toddler is no easy task: Sure, they've got some language skills — but it's a developmental stage where children are still learning to communicate and grapple with big emotions in a little body that can only express so much. As parents, it's easy to get frustrated with a stubborn toddler; this is generally the age when most parents have to start addressing discipline issues with their kids, be it time outs, time ins, or taking away toys and treats. But for one family in Texas, toddler discipline may have taken a tragic turn: A young girl went missing after her dad sent her outside for not drinking her milk. Even more tragically, authorities discovered a child's body on Sunday, approximately 0.6 miles from where 3-year-old Sherin Mathews went missing on Oct. 7, and officials believe it is "most likely" to be the body of the young girl as they await positive identification.

Sherin was reported missing on Oct. 7, after her father, Wesley Mathews, reportedly told her to stand in an alley adjacent to their family home in Richardson, Texas, a suburb just north of Dallas. Sherin was reportedly sent outside "because she wouldn't drink her milk," according to a court document obtained by CNN. According to Sherin's father, he discovered she was missing when, after 15 minutes of leaving his 3-year-old outside, he couldn't find her. The family alleges Sherin's mother Sini was inside the house asleep while all this transpired.

It would be another five hours before Mathews reported to police that his daughter was missing. Mathews was arrested and charged with child abandonment and endangerment, and has since been released on bond, according to authorities. Neither the Dallas County District Attorney's Office nor lawyers for Sini Mathews immediately returned Romper's request for comment, and Wesley Mathews' lawyer could not immediately be reached by Romper.

Sherin was adopted from India by Wesley and Sini Mathews in June of last year, according to The Times of India, after having spent a year in the care of a now-defunct NGO in Nalanda, India. Sherin, born Saraswati, was abandoned by her family after she was just over 1 year old. The Mathews also have a 4-year-old biological daughter, who was removed from their home and placed into foster care, where she will remain until a custody hearing scheduled for Nov. 13, The Dallas News reports.

While the child's body has yet to be officially identified by authorities, officials at a press conference Sunday morning said they have "no reason" to believe the body isn't that of Sherin Mathews. Additionally, that means there's no official cause of death, and police have not confirmed any other circumstances surrounding her death beyond when she originally went missing. According to statements by Sherin's father when she went missing, he had in the past seen coyotes in the alley where Sherin was told to go.

While the full details of Sherin's disappearance and likely death are yet to be released, her story raises several concerns. Her possible death is in many ways similar to newborns and infants who are killed by shaken baby syndrome, the leading cause of child abuse-related deaths in the United States. And let's be clear here: This was no ordinary time out. What Mathews is alleged to have done is, at a legal minimum, child endangerment by leaving a 3-year-old outside with no adults in an area known for coyote activity — and at 3 a.m., no less.

The greater issue that Sherin's tragic story highlights is just how quickly a parent's frustration with their child can escalate into something far more harmful and dangerous. As the American Academy of Pediatrics notes, physical and psychological child abuse is most often rooted in "parental feelings of isolation, stress, and frustration." The Mathews family must now grapple with a dangerous decision made in the heat of the moment, with consequences far beyond what they ever could have imagined or intended — and it's an important reminder to all parents to stop, step back, and take perspective in even the most difficult of parenting moments with their children.