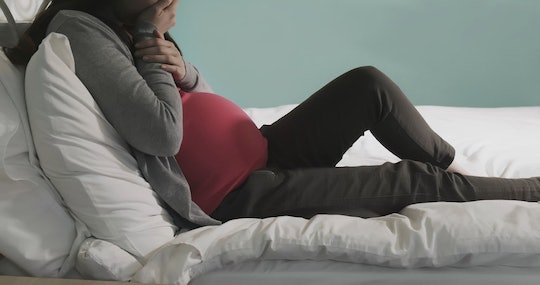 Anyone who has suffered from depression in pregnancy or the postpartum period knows that it can be incredibly debilitating, especially since it occurs at a time where you're often expecting to feel overjoyed and excited. But it's also far from being uncommon, with estimates as high as 1 in 5 women in some states, according to ABC News. In a new report though, the AAP is urging doctors to screen pregnant women and new moms for perinatal depression in an effort to better identify those who may otherwise end up suffering unnecessarily, and the recommendation can help connect more women with the medical care that can provide them with much-needed help.

As common as perinatal depression may be, things like mental health stigma and lack of awareness contribute to it going undiagnosed far too often. After all, while suffering from a mental health issue in general can lead to feelings of shame or fear or judgment from others, it can certainly feel even harder for a pregnant woman or a new mom to admit that they could be feeling anything other than overwhelming happiness and love towards their child — even though motherhood is often a physically and emotionally grueling time.

What's more though, is that doctors aren't always making the issue a priority. According to ABC News, half of all women in the United States suffering from perinatal depression remain undiagnosed and untreated, and screening rates, overall, are low. And though medical organizations have certainly be pushing for increased mental health screenings in previous years, the AAP's guidelines are the latest helping to drive the important point home.

In a statement Tuesday, the AAP said that "perinatal depression is both the most prevalent ... and the most underdiagnosed and undertreated obstetrical complication" facing American women, and as a result, the organization specifically recommends that mothers are screened for depression both during pregnancy by their prenatal care provider, as well as by their child's pediatrician "during the infant’s well visits at 1, 2, 4 and 6 months of age."

As awful as it is to suffer from depression, the Mayo Clinic has noted that thanks to options like psychotherapy and medication, it's often very-much treatable. Yet, when it goes undiagnosed, it's not just the woman who struggles; according to the AAP, "maternal depression has profound negative impacts on the short term and long term health of mothers and children, and on the entire family unit."

Another important element of perinatal depression that is finally becoming better understood? Moms aren't the only ones who can be affected. The AAP also noted in its recommendation that "fathers also experience a high rate of postpartum depression and need to be supported, identified and referred for treatment," the same way that mothers do, and that undiagnosed mental illness in dads can have a similarly harmful effect on the family.

In other words? Perinatal depression is a big deal, and though there are certainly treatment options, it's still flying largely under the radar. That's not entirely surprising, in itself: overall, mental health stigma still leaves people afraid to ask for help or admit what's happening, but when you add in the significant additional factors of new parenthood — sleep deprivation, hormonal changes, lack of social support, the sheer responsibility of having a tiny human to keep alive — it makes sense that parents may end up struggling.

Add in the fact that carefully-curated Instagram motherhood also offers first-time moms the expectation that it's always a blissful time of baby smiles, cute outfits, and bouncing back right away to full glam-mama mode? It definitely seems like an understatement to suggest women might be feeling a lot of pressure to feel a certain way during pregnancy and the postpartum period.

While it's natural that pregnant women and new parents would hope that the only thing they'd be feeling would be pure happiness and love, the reality is that the emotions that occur during that time are often far more complex than we might expect. But with treatment options available, there's no reason why anyone should have to manage perinatal depression on their own, and hopefully the new AAP guidelines will help connect those suffering with the help they absolutely deserve.