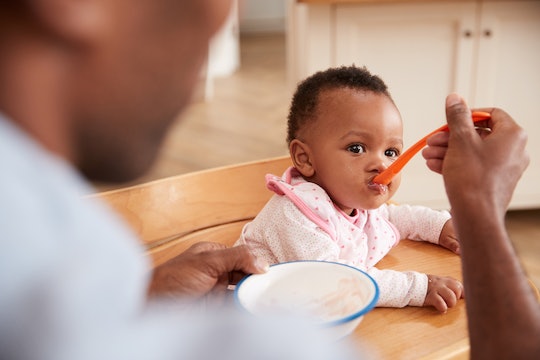 One of the more exciting milestones during the first year of a child's life is trying new foods. But food allergies hang over the experience for parents like a dark cloud of fear, and conflicting information has made the whole ordeal even more stressful for parents. Fortunately, the AAP's new allergy prevention guidelines make its recommendations crystal clear for parents, underlining the importance of early exposure and contradicting myths about delaying introduction of potential allergens.

After a thorough review of existing research and literature on the subject, the American Academy of Pediatrics published a report on preventing food allergies and other allergic conditions, as CNN reported. The main takeaway of the new guidance is the liberal introduction of foods commonly considered to be highly allergic — including peanuts, milk, and fish.

Despite the persistent misbelief to the contrary, there is no evidence to support delaying the introduction of allergenic foods past 4 to 6 months old — when other foods are commonly introduced, as reported by CBS News.

In fact, recent studies have suggested that early, strategic introduction to peanuts around the four-month mark may actually help to prevent peanut allergy development in infants with a higher risk of the allergy — i.e. those with a close relative with a food allergy, according to Food Allergy Research and Education.

The bottom line here, researchers told CNN, is to expose your children to a variety of food early and often, as early as 4 to 6 months old. Giving your child a diverse diet from the beginning — one that includes common allergens — not only protects your children from developing food allergies, but also establishes a healthy habit of eating a variety of food from an early age.

Dr. Scott Sicherer, a co-author of the report, explained in a statement that delayed introduction of allergens simply isn't necessary, according to Koam News. "There is no reason to delay giving your baby foods that are thought of as allergens like peanut products, eggs or fish," he said, as Koam News reported. "These foods can be added to the diet early, just like foods that are not common allergens, like rice, fruits or vegetables."

The AAP's recent report contradicts the myth that parents should hold off on exposing their infants to potential allergens until they are a year old. According to AAP News, prior to 2008, experts did recommend this delay — advising parents not to give babies eggs until 2 years old, and nuts, peanuts, and fish until age 3. More recent data has shown that this is not in the best interest of the child, so parents should feel fine including potential allergens in their child's diet early on.

Another important factor in determining and preventing food allergies in children is the short wait period between introducing new foods. The Centers for Disease Control and Prevention recommends that parents give their children one new food at a time, waiting three to five days between new foods. That way, they have time to determine what foods are associated with any potential reactions and get their child seen by a medical professional.

The early and often exposure guidelines should not be read as a free for all, though; there are still important steps for parents to take when introducing solids that may or may not be allergens. First, the new recommendations do not advocate for the introduction of solid foods prior to the four-to-six month window for the sake of allergy prevention. By "early," the report means no earlier than four months, according to CNN.

Along with reaching the proper age, the AAP recommends that parents look for cues that their baby is ready to eat solid food — including allergens. These include the ability to sit up and hold up her head; paying attention to food when parents are eating; having lost the tongue thrust reflex that automatically pushes food out of her mouth; and seems hungry after she finishes eating breast milk or formula, according to Parents.

These new guidelines serve to simplify the medley of advice that parents may struggle to wade through as they begin to introduce solids. And by clarifying instructions, the recommendations also serve to empower parents to make informed, accurate decisions in regard to their children's diets.