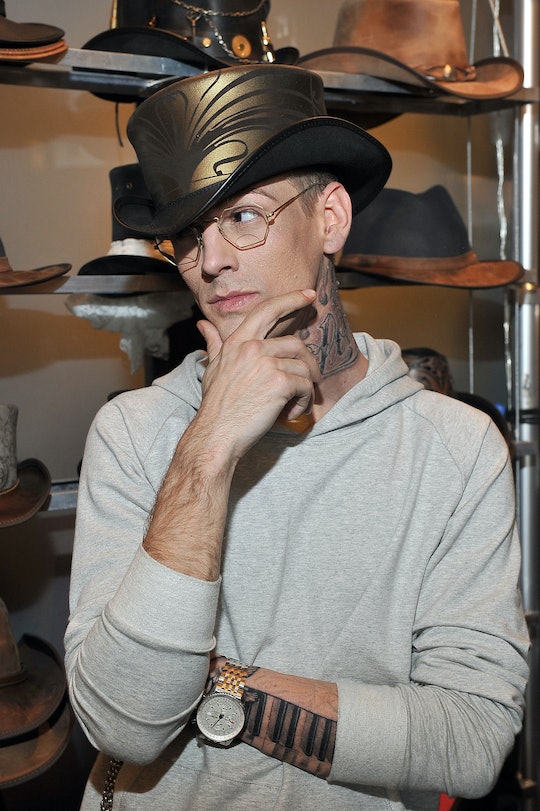 It's been a weekend full of '90s flashbacks, apparently — Danny Tanner is back on our televisions and Aaron Carter is suddenly relevant again. Well, maybe not relevant, but certainly in the news: Aaron Carter endorsed Donald Trump for president on Saturday, and that went over about as well as you'd expect on Twitter. And it would seem that he had a wide open schedule, because Carter had a Twitter meltdown Saturday afternoon over fan backlash to his otherwise random endorsement of the real estate mogul campaigning for the GOP nomination.

One astute Twitter user responded to Carter's presidential endorsement thusly: "Who cares???? @aaroncarter isn't even relevant...unless....wait....is it 2001 again??" — to which Carter rebutted with scholarly eloquence: "Lol uhhhhh O kay" ending his tweet with a pair of emoji that resembled an alarmed man and a whistling cloud. And it only gets better.

Carter posted a Periscope lashing back at disappointed fans with a colorful effusion of profanity — seriously, the number of times he used the word motherf*cker in his six minute rant rivaled a Tarantino movie – and explained he came to his very informed decision watching the GOP debate on Thursday while sitting in the airport: "I watched Donald Trump doing the flyover... So what? So what? I like that kind of stuff."

Carter's rant spilled back over onto Twitter, where he defended his support for Trump, responding to still-loyal fans and critics alike — all while "kicking back" and watching The Revenant and praising its cinematography. Watching Carter's Twitter tantrum was like witnessing modern absurdist performance art because there's no way he could be serious about 99 percent of the things he was tweeting, right?

But wait, didn't you say you stand with Trump?

But what about what you said earlier?

So wait, does that mean you're not endorsing the The Don then, Aaron?

According to his Facebook page, Carter lives in Los Angeles, California and his hometown is Tampa, Florida. The Florida GOP primary will be on Mar. 15 and California's GOP primary is Jun. 7, so regardless of where he votes, Carter still has plenty of time to change his mind again and re-endorse Trump. Or you know, we could all just get off his d*ck about it and shut the f*ck up.

Carter's last studio album, Another Earthquake!, was released in 2002.