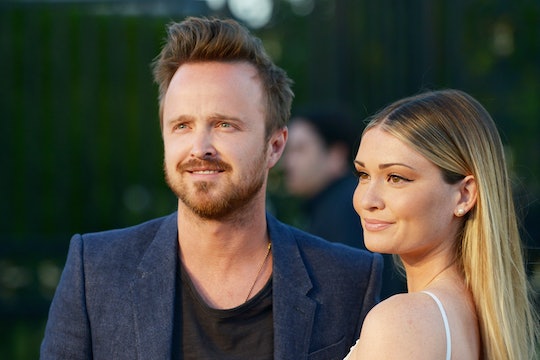 If you follow either of them on Instagram, you'll know that this couple can't help but regularly dedicate loving posts to one another. And not so surprisingly, their pregnancy announcement was done the very same, sweet way. Yes, Aaron Paul and wife Lauren are expecting their first child and you totally freak out now.

The Breaking Bad actor revealed it all on Instagram, writing:

Hey everyone. Look what I did. Words can't express how excited I am that this little one has entered our lives. Just thought it was time I would share this beautiful news with all of you.

Paul also added a baby and a red heart emoji to the message, which captioned a beautiful photo of his 30-year-old wife looking down at her bump, with one hand on her belly.

Lauren also posted about their newest happening, but her words and photo were a bit more playful. "Oh hi," she wrote underneath a photo collage that one can assume shows off her baby photo, Paul's baby photo, and a sonogram capture of their baby-to-be. If their baby pics are any indication, their addition is going to be one cute, blonde baby.

The couple has been together for some time, tying the knot back in 2013 after a year or so of dating, according to Just Jared. They got engaged in Paris in 2011, as People reported, so their love story has followed a long, patient path up until this point.

Back in June of this year, however, 37-year-old Paul told People that they "[hadn't] really thought about [starting a family]" yet, insisting: "There’s no rush into anything. So if it happens, it happens.” Well, it's definitely happened, and the two appear to be over the moon about all of it.

There's no doubt about it: Paul and his wife will be wonderful parents. The two shower each other with love on the daily, and have the most obvious respect for one another as partners and people. "My wife and I do not argue," he told Elle in 2014. "We communicate. We talk. But we've never fought in our entire relationship." Whether or not that policy has managed to stand the test of time, valuing communication is always the way to go, and should serve them well as their brood begins to grow.

In that same Elle interview, Paul admitted that the two actually have been thinking that they'd start a family ever since their second date. They went to Las Vegas together, as he explained, and zoomed on over to the Little White Chapel (which ended up being closed). On this excursion, "we bought our first child a baby leather jacket from All Saints," he told Elle, so it looks like their kid has a fashionable future ahead of them.

Another thing that ensures this kid's got two pretty cool parents to look forward to? Lauren's work is just as awesome as her husband's is. Her Kind Campaign non-profit "brings awareness and healing to the negative and lasting effects of girl-against-girl bullying," according to its website. In traveling around North America with her partner Molly Thompson, the women conduct documentary screenings, in-school assemblies, and develop educational curricula for students. Lauren devotes her time to promoting better, more loving communities for young women, and this focus on the future will make it a better world for her little one.

Obviously, fans are freaking out at the thought of their little baby on the way. Instagram users are already insisting that the two name their baby Jesse, after Paul's breakout, Breaking Bad role.

Hopefully, we'll get more sweet updates (and photos) as the two get closer and closer to becoming parents. As their love (and Lauren's bump) continues to grow, their #relationshipgoals will become #familygoals soon enough.