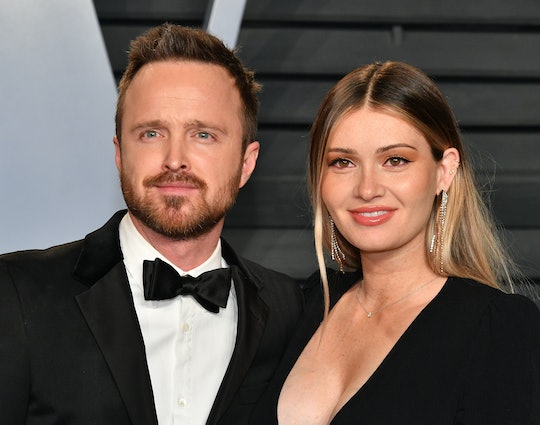 International Women's Day 2018 may be over, but I for one am still catching up on all of the amazing tributes on social media and the internet, celebrating women and all of our achievements and icons. Some celebrities and other famous personalities in particular had some beautiful things to say about the occasion, and while some just generally posted about how great women are, or about women throughout history who are #goals for them, others made their tributes more specific to the women in their own lives. Specifically, Aaron Paul's International Women's Day post about his wife and baby is so lovely, you've got to read it to really believe it.

Aaron Paul is probably best known for his role as Jesse Pinkman in the AMC series Breaking Bad, but he's also popped up in several other places on television and in movies in recent years — he even lent his voice talents to the popular "USS Callister" episode of the most recent season of Black Mirror. But it kind of seems like his favorite role these days is that of husband and father.

For International Women's Day, Paul turned to Instagram to gush over his wife, Lauren, and their 1-month-old daughter, Story Annabelle, who was born on Feb. 6, according to People. And I'm not talking two lines, a bunch of emoji, and a cute photo. Paul really had something to say when it came to the two most important ladies in his life.

Paul began the touching post, "Life. To live. What an extraordinary gift that we as a whole constantly take for granted. It’s easy to forget how lucky we are." He continued, writing about how wonderful both Lauren and Story are. When it came to his daughter, Paul's tribute was so beautiful when he wrote, among other things:

Her name is Story and each breath she takes makes me weak. The sounds she makes when she stretches and yawns are what I live for. Her sneezing and hiccups make me feel warmth like I have never felt.

And his testimonial to his wife was just as lovely. Paul wrote about Lauren:

And that was just the beginning. Paul went on for several paragraphs about love, parenthood, life, existence, and everything in-between. Because if you're going to write a heartfelt homage to your wife and daughter, you'd better do it right, and Paul certainly did just that.

Now, I can't say for sure that Paul meant to write the post specifically as a tribute for International Women's Day, because he didn't put #IWD2018 or anything like that on it. But the timing was right, and he's definitely posted about political and social issues on Twitter before. Plus, his wife definitely posted about the day on her own Instagram, so he was likely very aware of the significance of the day when he wrote the sentimental tribute to his family.

International Women's Day is "a global day celebrating the social, economic, cultural and political achievements of women," according to its official website. Many individuals and organizations alike used the day to talk about the strides women have made, and the work that still needs to be done. But there were also a lot of people who gave a shout-out to the women who have made a more personal difference in their lives, and Paul was one of them. His just happened to be one of the most touching ones that I saw.

This wasn't even the first time that Paul has posted about his wife or daughter on Instagram. He's clearly devoted to them, and seems to revel in his most important starring role as a member of their little family.

Paul has never been shy about how he feels about Lauren, but even he seems in awe of how much he adores his wife and the child they share together. When they got married in 2013, I wonder if Paul foresaw all the cute baby photos and beautiful Instagram posts he would share with the world, or if even he was blindsided by "what a miracle" their life together is, and how much he wanted to share that reverence with fans. The rest of us are just lucky enough to get to have a little peek into their "perfectly imperfect" life together.