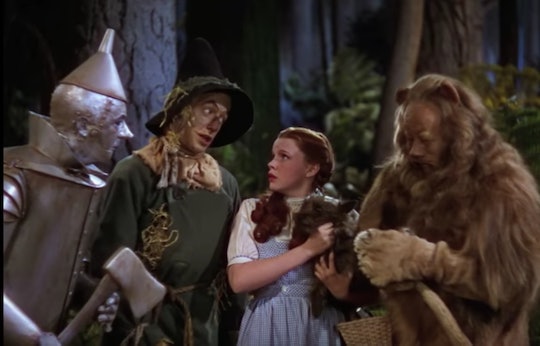 An Abandoned 'Wizard Of Oz' Theme Park Is Reopening This Summer, So Dust Off Your Ruby Slippers

If you're still in the market for a family vacation destination this summer, you might be in luck. An abandoned Wizard of Oz theme park is reopening in North Carolina this summer, and tickets are already going fast. Well, it was never actually abandoned, according to the Charlotte Observer. The Land of Oz, in Beech Mountain, opened in 1970 and after a fire and some other minor disasters, it officially "closed" in 1980. Then, in 1990, it started opening for some events in the fall, with ticket sales going towards renovating the park, though it's never fully reopened.

And it's not technically reopening this summer either. But it will open for one-hour guided tours every Friday in June and on Saturday, June 30, the Charlotte Observer reported. Tickets cost $25 and kids under 2 years old are free, although it could be a little intense for a tiny kid.

The website for the theme park explains, "With Dorothy as your guide, you will skip down the yellow brick road through the magical Land of Oz. You or other members in your group are randomly selected to play the characters of the Scarecrow, Tin Man, Lion, Witch and Glinda. This is a completely immersive interactive experience."

It's either the best or creepiest thing you'll ever do. The park has everything you'd expect from an Oz theme park — a yellow brick road, old farmhouses where the characters live, an IRL Emerald City, complete with a stage, and the Wicked Witch from the West's castle. It's definitely something to see if you have kids, or if you're looking for a dose of nostalgia.

That sounds like a joke, but remember, it was built back in 1968, which was quite the time for wild ideas like this one. According to the park's management, Grover and Harry Robbins of the Carolina Caribbean Corporation bought the land to make a vacation destination. The brothers, who had built other family resorts in the area, wanted to make a park that could be used in the fall, spring, and summer, when skiing on Beech Mountain was not the go-to activity.

They brought on a designer, Jack Pentes, who was inspired by the trees, which looked like the apple trees from the Wizard of Oz movie, according to the park's website. Ray Bolger, who played the Scarecrow in the film, used a "psychedelic shovel" to break ground on the project, according to RoadTrippers.com. The park's website further explained that it was "designed from a child’s perspective" and used over 150 local artisans to actually lay the yellow brick road.

When it opened, Debbie Reynolds and her daughter, Carrie Fisher, cut the ribbon. Muhammad Ali, Anita Bryant, Jay North, and Charles Kurait were some of the most famous visitors, according to the park's website. There was a live show every half hour, a ski lift that looked like hot air balloons to take people "home again," to their cars, and even a petting zoo, according to Open Culture. (It's not clear exactly how many of those features will be there in June.)

But then things started to go really wrong. Grover, one of the owners, died just before it opened and the company faltered without his leadership, as Vice reported. Then just after Christmas in 1975, someone set fire to Emerald City and destroyed the amphitheater, gift shops, and the restaurants, according to Vice's report.

At the same time, someone broke in and stole the original costumes the park had bought from the David Weiss MGM Liquidation Auction of 1970, according to the park. That included Judy Garland’s original gingham dress, Munchkin jackets, and Frank Morgan’s Guard of the Gate jacket, according to Vice. The park made repairs and all, but it never got back to be as awesome as it was before. Maybe the magic was in that gingham dress, you know? So, the park closed its doors until it began reopening for autumn events every so often a decade ago.

Which, as you can imagine, made the area a destination for hikers and people exploring Beech Mountain, since all of "Oz" was still intact — there was just no one there to guide you around. Luckily for us, all of that is changing this summer, thanks to the park opening for every weekend in June, and hopefully again next fall for travelers. Hopefully, Land of Oz can get back in gear full time, all summer, every summer. I mean, that yellow brick road was basically made for Instagram.