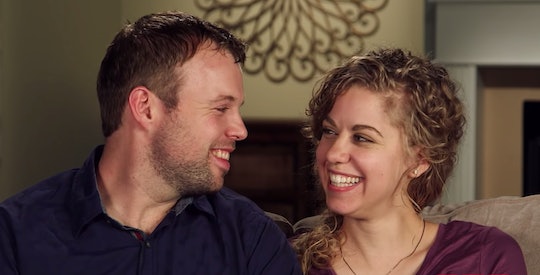 The Duggar family has grown once again — and by two little feet, to be exact. That's because Abbie and John David Duggar have welcomed their first child, the couple announced on Thursday. Abbie gave birth to a baby girl on Jan. 7, and she's just too precious.

"Our lives have changed forever with the arrival of our baby girl," the new parents wrote in a statement on the Duggar family's website. "She is a beautiful gift from God! We are so blessed the Lord has given her to us. It’s still surreal to know that we are really parents, but it's a great new adventure that we are excited to take on together!"

John and Abbie also shared their exciting news Instagram and revealed they intend to call their little girl "Gracie."

"Gracie was born early Tuesday morning, she was 7 pounds 11 oz and 20 3/4 inches long," they wrote on Instagram. "We are quite smitten by our new bundle of joy and are soaking in all of her little newborn snuggles!"

John David and Abbie — who tied the knot in November 2018 — revealed they were expecting their first child on Aug. 1. They were the last of a cluster of Duggar couples to reveal a pregnancy in 2019. “We are on Cloud 9 about welcoming our own little Duggar into the world,” the Counting On couple wrote on Instagram, along with a photo of themselves in an airplane. “It really is amazing to think about being parents and having our own child to raise. We are thankful that God has blessed us with this new life and we look forward to taking on this new adventure!”

Just a few weeks later, John and Abbie had an elaborate sex reveal — once again, involving an airplane — revealing they had a baby girl on the way. "We couldn’t be more excited to announce...ITS A GIRL!!!" they wrote on Instagram, along with a photo of themselves kissing under a shower of pink confetti.

In addition to finally being able to meet her baby girl, Abbie is likely relieved to no longer be pregnant — and for a totally understandable reason, as she suffered from hyperemesis gravidarum (HG.)

"It hit her hard, and she was down for probably seven weeks with severe morning sickness,” John David told Us Weekly. "She got diagnosed with hyperemesis gravidarum, and she was hospitalized a couple times. We made multiple visits to the ER for dehydration... She couldn’t eat, pretty much, or drink, or anything. So she was actually on IVs and had IVs at home. So that was a pretty scary time."

John David did his best to support his wife through that difficult time. The devoted dad-to-be told Us Weekly that he made it point to keep Abbie's water filled up, to always have snacks handy, and to provide whatever cater to her cravings — even if that meant a late-night trip to the store. One time, John David made a special trip just to fetch his wife a heat pack. “He said, ‘No, you need this. I want to go get it for you,’” Abbie told Us Weekly. “He’s cooked for me. He’s cleaned. He’s just been an angel.”

Considering at one point, John David declared he would be a "bachelor 'til the rapture," the Counting On star has come a long way in just one year. I, for one, am thrilled that he not only found the love of his life, but now he has a baby girl. Congratulations, John and Abbie!