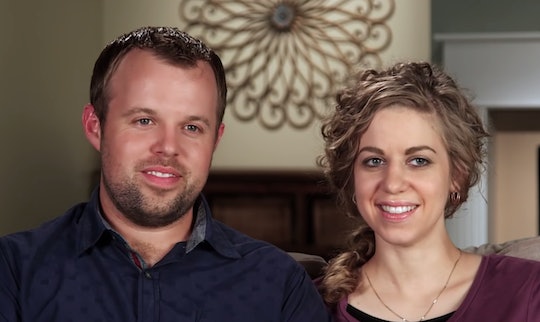 Following the great Duggar baby boom of 2019, there is just one Counting On couple that is still expecting: John David and Abbie. However, within a matter of weeks their little girl will be here, too. And Abbie Duggar's baby shower looked like it was a cozy, family affair.

But now, it's finally John David and Abbie's turn. The couple — who married "older" compared to the rest of the Duggar siblings so far, and therefore got a later start to their family — announced they were expecting their first child in August, according to People. Just a few weeks later, John and Abbie revealed they're having a baby girl. It wasn't until October that the expecting parents shared Abbie's approximate due date: January 2020. And considering she was 25 weeks along on Oct. 1, that puts her due date on or near Jan. 14.

With the big day now a week or two away — because let's get real, babies rarely arrive on their due dates — the Duggars recently threw a baby shower for Abbie. The official Duggar family Instagram account, which is managed by Michelle and Jim Bob Duggar, shared a series of photos from the party held on Jan. 3.

"It was a sweet time celebrating @johnandabbie with a shower before the arrival of their baby!" the Duggars captioned the post. "We are counting down the days with you, Abbie, and can’t wait to meet your precious little girl and see her in all those new adorable outfits!!"

The shower evidently took place at the "big house" (AKA Jim Bob and Michelle's place) in Tontitown Arkansas. And from the looks of it, the get-together was a cozy, girls-only time filled with yummy snacks, plenty of presents, and what looks like a bit of Christian fellowship. (Along with the concerning absence of Jill Dillard, as some fans pointed out.) Take a look for yourself!

With so many Duggar babies born over the past several months, John and Abbie's daughter will have plenty of cousins around the same age to play with as she grows. (I'm sure there will be no lack of hand-me-down clothing, either.) Hopefully, everything goes smoothly with Abbie's labor and delivery in the coming days/weeks. I, for one, can't wait to see photos of their baby girl, and to finally see John David — the once self-proclaimed "bachelor 'til the rapture — as a father. The countdown is on!