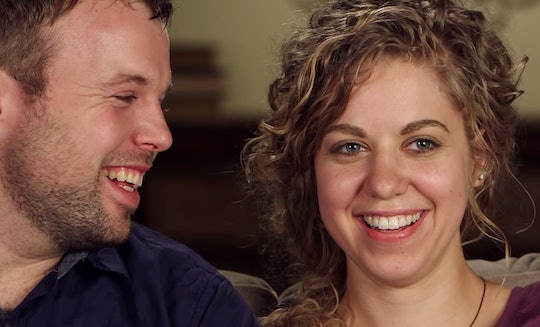 Immediately after Hurricane Dorian blew through the Bahamas at the start of September, the devastation was clear. Relief efforts then commenced, and among the volunteers sent in to deliver supplies and offer their services were stars of the TLC series, Counting On. Additional members of the famous fam recently traveled to the area, including John Duggar's wife. As it turns out, some fans are worried about Abbie Duggar's Bahamas trip due to her pregnancy. Although the worry likely comes from a good place, it doesn't necessarily make sense given her background as a nurse.

Hurricane Dorian may no longer be dominating news headlines, but the destruction and the humanitarian crisis is ongoing. The Bahamas were ravaged as Dorian — then a Category 5 hurricane — slowly crawled across the islands. So far, the official death count still hovers around 50, with 1,300 still missing, according to BuzzFeed News.

Not long after Dorian hit, members of the Duggar family, including John David, Jana, Jason, and James Duggar, along with Joy-Anna's husband Austin Forsyth, took off to help with relief efforts in the Bahamas. It looks like they went as part of MEDIC Corps, a charity the Duggar family apparently created, according to Cafe Mom.

On Monday, Sept. 16, John David and Abbie shared more photos from the ongoing relief efforts in the Bahamas. Except this time, Abbie was there alongside her husband, according to OK! magazine. "We were privileged to serve with @mediccorps and many other great teams to help with disaster relief in the Bahamas," John and Abbie captioned a group photo of the volunteers. "The devastation from hurricane Dorian is overwhelming! Please continue to pray for our team working on the ground and for the people of the Bahamas as they look to the future."

Plenty of Instagram users praised Abbie and John David for their service. One follower commented, "I love that you are able to serve together!"

Another Instagram user wrote, "Thank you for your selflessness!"

Yet another person chimed in with, "It's really wonderful to use your skills and talents like this!"

However, one person seemed appalled that Abbie — who is pregnant with her and John Davi's first child — would even consider traveling to the Bahamas. They wrote, "I thought Abbie was pregnant. Why would she risk it by being there?"

If you're like me (and many of the other commenters, I might add) you might have been scratching your head thinking, "Um, what?!" At first, I assumed this person was worried about Abbie flying while pregnant, which isn't generally an issue if there aren't any complications and the due date is far away enough. The original commenter later clarified their concerns, however, explaining, "I wasn't referring to flying restrictions. Do y'all even realize how high the risk for infection is in this areas after a catastrophic event like that? Nurse or not, it doesn't seem like a wise choice."

Another person complained, "Working in a disaster like that with skirts & sandals? Really?"

This is actually a somewhat valid concern, for the record. That's because following a natural disaster like Hurricane Dorian can result in a lack of access to toilets, clean water, and medication, which in turn means an increased risk for disease, TIME reported.

Contaminated water already seems to be wreaking havoc in the Bahamas via gastrointestinal issues, while stagnant and untreated storm water can also turn into breeding grounds for mosquitos, according to TIME. This means diseases like dengue, chikungunya, and Zika are of potential concern. Following Hurricane Maria in 2017, for example, at least 24 people reportedly died in Puerto Rico as a result of a leptospirosis outbreak, and thousands died from cholera in Haiti after a 2010 earthquake.

Then again, Abbie did work as a nurse before marrying John David. So chances are, she's aware of the risks involved and weighed them accordingly with her doctor before flying off to the Bahamas. One person touched on this, saying, "Yes Abbie is pregnant and that is not a disability. She is a nurse and knows her own body. I am sure she is knowing her limits."

Here's a thought: Perhaps fans should give the Counting On star the benefit of the doubt in this situation, instead of insinuating she's putting her pregnancy at risk? Either way, Kudos to the Duggar family for stepping up and helping out with the ongoing relief efforts in the Bahamas.