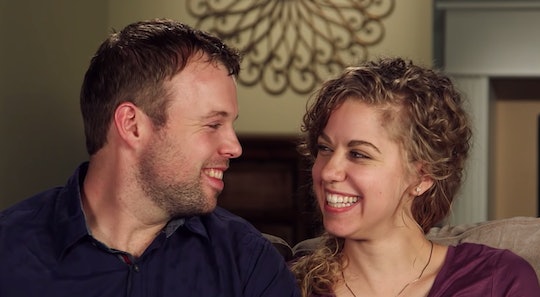 These days, it's not uncommon for celebrities to share behind-the-scenes details about their pregnancies, all the way from weekly bump photos to ultrasound videos, to name a few examples. And those who are fans of TLC's Counting On have a lot of different expecting Duggar ladies to keep up with these days, including Abbie Duggar, who shared a pregnancy update Tuesday in which she revealed that her first trimester was kind of rough.

In case you missed the big news, John David and Abbie are the most recent Duggar couple to announce they're expecting a baby (this makes a total of five Duggars-on-the-way!) The parents-to-be posted an adorable pregnancy reveal via Instagram on Aug. 1, E! News reported.

"We are on Cloud 9 about welcoming our own little Duggar into the world!!!" John and Abbie captioned a photo of themselves holding up a "Baby Passenger on board" bodysuit. "It really is amazing to think about being parents and having our own child to raise. We are thankful that God has blessed us with this new life and we look forward to taking on this new adventure!"

Then on Monday, Aug. 19, John and Abbie took to Instagram to share an exciting update with followers. “Boy or girl, what’s your guess?” they captioned a post of photos from their sex reveal party.

Not too long after that, John and Abbie shared a second Instagram post with the long-awaited answer. "We couldn’t be more excited to announce...ITS A GIRL!!!" they wrote on a shot of the parents-to-be kissing with pink confetti raining down on them.

The news was also shared in a TLC video, during which the excited parents-to-be spilled more details about the sex reveal. "We knew the gender of our baby, but our family didn't," John David explained in the video, according to People. "I mean nobody else here except for Jana knew."

"So the crowd was kind of split half and half between boy guesses and girl guesses," Abbie added.

The mom-to-be went on to share what she's looking forward to the most now that they know there's a baby girl on the way. This includes "hair bows and pink dresses and lots of sparkles," according to Abbie.

As for for John, he added, "I'm really looking forward to have a little baby girl around the house. I already have one. So now I'm going to have two. I just hope she's as pretty as her mommy. I know that she will be." So sweet!

Hopes for the future aside, Abbie also shared with fans how her pregnancy has been going so far. And unfortunately, it doesn't sound like it's been easy. "The first trimester of my pregnancy was pretty rough," Abbie explained. "Now that I'm in the second trimester, I feel like a human again. It's going great."

Although she didn't elaborate on the "pretty rough" part, it's probably safe to assume Abbie experienced nausea and/or vomiting during her first trimester, and maybe even some exhaustion for good measure, all of which is completely normal during those first months of pregnancy. Most people find that "morning sickness" subsides between 14 and 20 weeks, according to BabyCenter.

Thankfully, the worst of it seems to have passed for Abbie now that she's in her second trimester, and it shouldn't be too much longer now before she's able to feel her baby girl kicking. Congrats again to John David and Abbie!

More Like This
What Is Acid Reflux Tape? Chrissy Teigen Swears By It
Chrissy Teigen Credits Popular Animated Kids' Show For Giving Her "Peace & Rest"
Yes, It’s Possible To Get Pregnant If You Have An IUD
40 Lovely, Lively, Lavish Girls Names That Begin With “L”