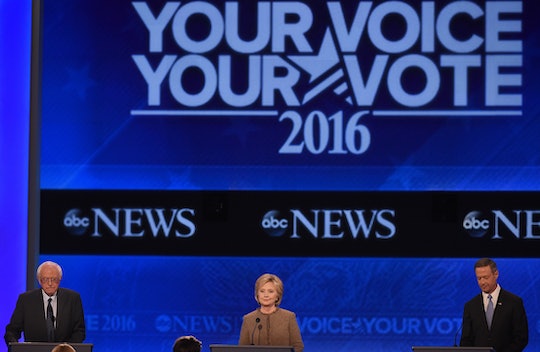 ABC Democratic Debate Live Stream Screwed Up? Here's Where Else You Can Watch Hillary and Bernie Face Off

One of the best things about living in 2015 is that you can live stream really important events on TV like NBC musicals, your friend's makeover tutorial, or the presidential debates. On Saturday night, ABC’s live stream of the Democratic debate went down went down just as it started. That’s totally lame on a few levels. A major news network has no excuse to not have everything in order to effectively stream a presidential debate, for free. It’s not necessary, but even Apple live streams iPhone announcements (althought those streams also fail sometimes). If you want an informed citizenship, it’s journalism 101 these days to stream it for free.

CNN, Fox, and CBS have all offered the debates for live stream without a cable subscription authentication this election cycle. And surprisingly, not one of them have faltered. Just as the clock struck 8 p.m. ET, ABC’s started to get a little wonky. It also goes to show that the Democratic debates have a strong viewership, despite some of the candidates complaining that the Democratic National Commitee was scheduling debates on weekends so that no one would watch. If a live stream fails, it's because there are too many people tuning in. There's a solid live stream of the debate running here if it happens again and you don't have cable.

Come on, ABC. This is important. Get your life together.