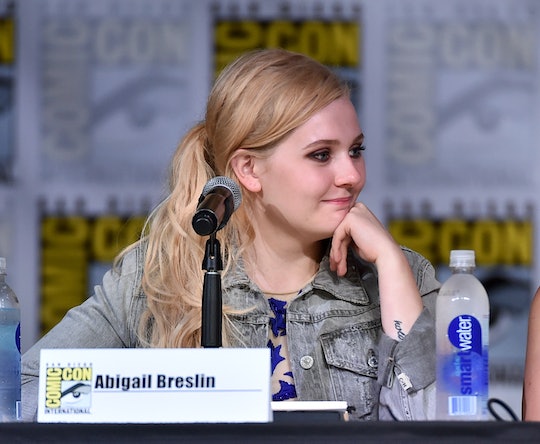 Abigail Breslin: beautifully blossomed child star, social media maven, all-around rock star, and advocate for sexual assault victims everywhere. The 21-year-old actress has been outspoken about women's rights and a general badass in terms of using her platform for good for a while now. And recently, the star of the upcoming Dirty Dancing remake has spoken out again, this time recalling her own sexual assault and what consent really means. In her most recent Instagram post, Abigail Breslin insisted that not reporting rape doesn't mean it didn't happen, and her comments need to be heard by everyone.

Saturday, Breslin uploaded two photos on Instagram, opening up the conversation about consent, sexual assault, and the policies put in place that make reporting assaults so difficult. Her first photo, a screen shot of an infographic from RAINN (Rape, Abuse, and Incest National Network), shows the statistics behind a sample size of 1,000 rapes, namely, that out of those, 994 will walk free. Following that post, Breslin also posted a screenshot of a note from her phone, responding to a comment someone had posted on her original photo, saying that "reported rapes are the only rapes that count." And honestly, Breslin's words are not only incredibly touching, but also important to the dialogue as a whole.

Not only is Breslin's original post important, but her own recounting of her rape is seriously critical for everyone to read. Breslin explains why she didn't report her own rape, stating three, very real, reasons.

First, Breslin explains that recognizing that she was raped took a lot of time and emotional strength; Then Breslin stated that she knew her assailant, and in fact, was in a relationship with him. She feared for her safety if she reported him and nothing came of it. Finally, Breslin states one reason that many people might not ever think of: the repercussions her report would have on her family and friends.

Not only did Breslin's comments and posts make a crucial point on how sexual assault cases are handled in the United States, but she also explained why so many victims are so hesitant to come forward. And with men like Brock Turner and so many others still able to walk away relatively unscathed (with only a slap on the wrist) following sexual assault accusations and court cases, Breslin's post feels painfully timely.

Sexual assault is a crime, and whether it's reported or not, it has a tremendous impact on the victim's life. But as Breslin notes, the system is broken, and something needs to change. Until then, claiming that the "only rapes that count" are ones that are reported, it should go without saying, is a totally moot point.