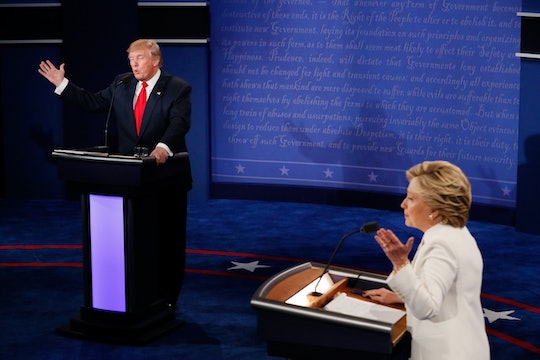 During Wednesday night's third and final presidential debate, the candidates discussed their thoughts on one of the most divisive topics in our country: abortion. While Democratic candidate Hillary Clinton defended women's rights to an abortion, Republican nominee Donald Trump called her out for supporting late-term abortion. At one point during their conversation, Trump claimed that Clinton supports aborting a fetus as late as during the ninth month of pregnancy. But here's the thing: abortion at nine months pregnant isn't a thing.

Trump, who said he wished to eliminate Roe v. Wade, made the claim that Clinton supports abortions "days" before a baby is due, according to Vox:

If you go with what Hillary is saying, in the ninth month you can take the baby and rip the baby out of the womb of the mother just prior to the birth of the baby. Now, you can say that that’s okay, and Hillary can say that that’s okay, but it’s not okay with me. Nobody has business doing what I just said. Doing that as late as one or two or three or four days prior to birth. Nobody has that.

By talking about "nine-month abortions," Trump has shown his lack of knowledge about late-term abortion — not great when you consider the fact that, should he become president, it will affect the ability of women across the nation who face such an important and painful decision.

A baby is considered "full-term" at 39 weeks pregnant. The vast majority of abortions occur during the first 13 weeks of pregnancy: 91 percent, according to the CDC. Late-term abortions, which occur after the 20-week mark of pregnancy, make up just 1.3 percent of all abortions. Most women who make the difficult choice to have a late-term abortion did not have the option any earlier, according to Slate. This is because the comprehensive fetal testing that can find severe birth defects, such as heart defects and abnormal development of the nervous system, is typically performed around the 20th week of pregnancy.

Options for abortion after the 24th week are extremely limited in most of the country, and are almost always for medical reasons. In 80 percent of cases, late-term abortions are necessary because of birth defects, according to the Huffington Post. The other major reason why women have late-term abortions is because their life is in danger.

Clinton corrected Trump by saying his description of late-term abortions is "not what happens," and called his words "scare rhetoric," according to ABC News.

She discussed her encounters with women who've had abortions and defended a woman's right to choose, ABC News:

The kinds of cases that fall at the end of pregnancy are often the most heart breaking, painful decisions for families to make. I have met with women who have, toward the end of their pregnancy, get worst news one can get—that their health is in jeopardy if they continue to carry to term, or that something terrible has happened or just been discovered about the pregnancy. I do not think the United States government should be stepping in and making those most personal of decisions. so you can regulate if you are doing so with the life and the health of the mother taken into account.

Trump isn't the only one at the debate who painted an inaccurate portrait of what late-term abortions look like, though. Moderator Chris Wallace brought the topic of abortion up by questioning Clinton on why she's defended "late-term, partial birth" abortions, suggesting the two are related.

But a partial birth is not related to late-term abortion, making the question misleading. Partial-birth abortion is an inflammatory political term used by people who are anti-abortion to describe late-term abortion. In no abortion is the fetus as all alive, thus it isn't a "birth." A birth in the ninth month of pregnancy would be called an emergency C-section.

If anything, the debate was an indicator that the politicians who are in charge of making decisions regarding something as sensitive as abortion need to have a greater understanding of the topic first.