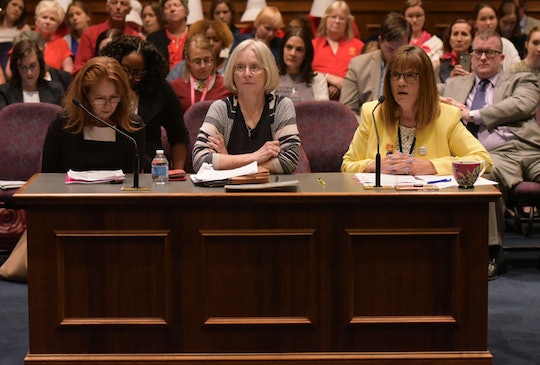 As a wave of anti-abortion bills pushed forward by Republican lawmakers take a hold of the states, two abortion bills in Illinois and Nevada protecting women's rights have made their way through their respective state legislatures.

On Friday, the Illinois legislature passed Senate Bill 25 in a 34-20 vote, creating the Reproductive Health Act. In a stark contrast to recent heartbeat bills, this legislation states that “every individual has a fundamental right to make autonomous decisions about one’s own reproductive health” and ensures that pregnant women have the right to “have an abortion, and to make autonomous decisions about how to exercise that right.” SB25 also explicitly states that “a fertilized egg, embryo, or fetus does not have independent rights under the law.”

“As states across the country pass dangerous laws restricting access to abortion, we in Illinois are standing with women and guaranteeing access to reproductive health care,” Illinois state Sen. Melinda Bush, the legislation’s chief sponsor, said about the bill in a statement. “There’s a very real possibility that Roe v. Wade will be overturned in the next few years. The Reproductive Health Act guarantees that women in Illinois have the right to make decisions about their bodies, regardless of what happens at the federal level.”

Included in Illinois’ act are measures to repeal felony penalties that would have criminalized doctors for offering abortion care and contraceptives. The legislation, which passed in the state’s House of Representatives last week, would also treat the cost of abortion like all other medical expenses and would require insurance companies to provide coverage for termination.

The bill now heads to Illinois Governor Pritzker, who is expected to sign it.

In a similar effort, Nevada passed Senate Bill 179, or the “Trust Nevada Women Act,” which would repeal requirements from 1985 prohibiting physicians from performing abortions on pregnant minors without parental consent. According to the act, which was signed into law by Nevada Governor Steve Sisolak on Friday, physicians will no longer have to confirm in writing a pregnant woman’s marital status and age before performing an abortion.

Sisolak said on Twitter that he signed the legislation to not only “make a difference,” but also to “send a message to the rest of the country that Nevada will NOT go backwards when it comes to reproductive rights and health.”

Nevada and Illinois’s efforts to uphold women’s rights to reproductive health come while countless anti-abortion bills are sweeping the nation. Anti-abortion measures known as “heartbeat bills,” which would restrict abortion after detection of a fetal heartbeat, have been passed in at least five states. In 2019 alone, permutations of the anti-abortion measure have been introduced in at least 16 states. Most recently, Louisiana joined a string of states, including Georgia, Alabama, Ohio, and Missouri, in restricting abortion access for women seeking termination.

With civil rights organizations, activists, and concerned citizens gearing up for an eventual legal battle in the Supreme Court over the controversial legislation, the future of Roe v. Wade still remains uncertain.