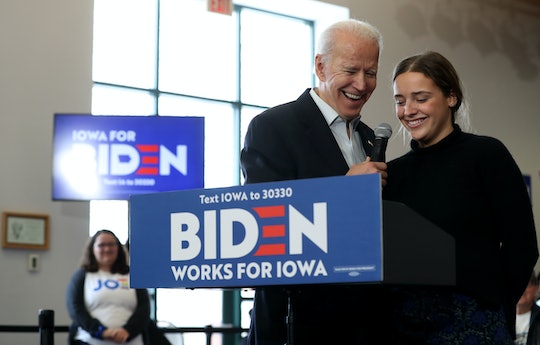 About That Biden Kiss

For the past 3,001 years, give or take, hopefuls for the U.S. presidency have campaigned throughout Iowa in many of the usual ways: shaking hands, taking selfies, and eating their weight in fried foods at the state fairs. While kissing babies has long been a trusty campaigning strategy, Vice President Joe Biden was criticized for reportedly kissing his granddaughter, Finnegan Biden, on the lips at a February 2 event. The split second was, unhappily, caught on film and people had feelings.

Here's what I will say: the photo does strike the eyes. Kissing relatives on the lips isn't exactly common in mainstream American culture to begin with and can strike some folks, who associate kissing on the lips exclusively with romance, as weird. Moreover, a photograph, a single moment frozen in time, can make it seem like the kiss (which the New York Post described as "a quick peck") was lingering and inappropriate. But, watching videos of similar interactions between Biden and his granddaughter, it likely was neither of those things and I feel like, deep down, we know that.

If kissing on the lips inherently romantic to you, that's fine! Simple solution: don't kiss your relatives on the lips! But not everyone sees it like that. Some families are more physically affectionate than others and that's OK. People on Twitter have pointed out that this was not the first time Biden has give Finnegan a kiss on the lips at a campaign event. (The Post did not receive a response from Biden's campaign to a request for comment, nor did Romper.)

Lest you get all swept up in this kerfuffle, cast your mind back to the Tom Brady Kissing His Son on the Lips Incident of '19, or the David Beckham Kissing His Daughter on the Lips Incidents of '17 (or '18!). Or any number of think-pieces debating the subject of kissing our children/grandchildren/assorted loved ones on the lips. Just let people live, for goodness sake. No one is saying you have to or should kiss anyone on the lips if you're not comfortable doing so. It's not like Biden, Brady, and Beckham are going to come to your house and force you to start smooching your relatives to make a point. But maybe just accept that different families show affection differently.

So take a breath and relax, everyone — it's not like Biden said he wanted to date her or anything. It's not, you know, this. Shudder if you want and then move on. After all, we have another 4,700 years of campaigning to get through.