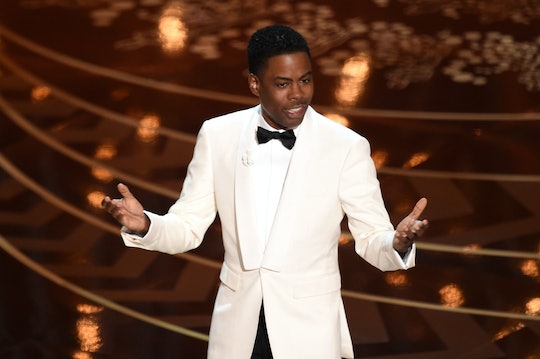 Academy Apologizes For Chris Rock's Asian Jokes & It's About Time

It's about time. Three weeks after the 2016 Oscars went down, the Academy of Motion Picture Arts and Sciences has finally apologized for Chris Rock's Asian jokes that the comic made while hosting the ceremony. Most people assumed that the #OscarsSoWhite insults would inevitably be the jabs that were going to get the comedian in trouble, but it turns out that Rock's quip involving adorable Asian children really had people ticked off (for good reason, of course).

Don't remember the specific Asian joke Chris let out? No worries, its been a while since the show aired. Here's the basic gist: Rock's offensive remarks came as he was discussing the fact that the Oscars' results were tabulated by the accounting firm of PricewaterhouseCoopers, the "most dedicated, accurate and hard-working representatives", just before three Asian children walked onstage behind him in tuxedos, with briefcases in hand. The kids were cute as ever, but the stereotypical portrayal of Asians as super smart, studious, nerdy, model minorities was not.

In the aftermath, an open letter circulated by several high profile actors in Hollywood began taking off, attracting the attention of The Academy. In the letter, which was dated March 9, public figures like director Ang Lee, actors George Takei and actress Sandra Oh, and director/screenwriter Freida Lee Mock, along with many others, expressed disapproval of Rock's joke, which they claimed was insensitive.

"In light of criticism over #OscarsSoWhite, we were hopeful that the telecast would provide the Academy a way forward and the chance to present a spectacular example of inclusion and diversity," they wrote. "Instead, the Oscars show was marred by a tone-deaf approach to its portrayal of Asians."

David Magdael, an Academy member and part of the group's public relations arm told The Hollywood Reporter this week that the majority of the letter's signers were shocked that the moment had ever occurred. "When that skit came up in the middle of the Oscars, we all went like, 'What?' There was a collective, 'That didn't just happen,'" he said. "We found a lot of people who said, 'We're not going to accept this sort of joke anymore,' especially right after [Academy president] Cheryl Boone Isaacs gave that speech about diversity."

An Academy spokesperson on Tuesday finally spoke out, saying that the group understood the "concerns stated" in the letter, and that they regretted "any aspect of the Oscar telecast was offensive." The spokesperson added that the Academy would attempt in future telecasts to be more "culturally sensitive."

Rock himself seemed to have understood the divisive nature of his original comments, noting during the telecast that "If anybody's upset about that joke just tweet about it on your phone that was also made by these kids."

Although it took two weeks for The Academy to respond to the outcry, at least the group seems to have tried half-heartedly to make amends. Whether or not Rock will be invited back to host is another question altogether.