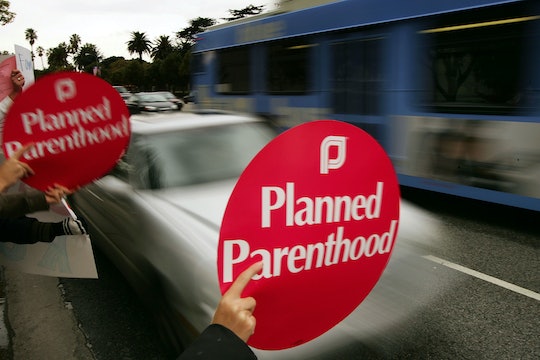 UPDATE: Late Friday night police identified Robert Lewis Dear as the suspected gunman who fired into a Planned Parenthood in Colorado Springs earlier in the day. Dear is reportedly 59 and from North Carolina.

According to reports, a shooter fired rounds into a Colorado Springs Planned Parenthood clinic. The Colorado Springs police department tweeted Friday that it was "responding to a call," and that the "area is NOT secure." And after the FBI got involved, and officials faced off with the suspect, the shooter has been detained after an hours-long stand-off, and three people have been killed, one police officer and two civilians.

Said Mayor John Suthers, "The perpetrator is in custody. The situation has been resolved. There's no continuing peril to the citizens of Colorado Springs."

But there are still a lot of unanswered questions. Like, who is the shooter who was detained? USA Today reports that a gunman wearing a "long coat and a hunting-type hat" shot through the windows at the Planned Parenthood clinic. According to officials, four police officers were injured in the incident, while CNN reports at least eight people total were injured. USA Today also said there were civilian injuries, though it's unclear the extent of those injuries and how many were injured at this point.

Though there are few details at the moment as to what exactly happened at the facility — police representative Lt. Catherine Buckley told reporters it's even unclear as to whether or not the shooting motive was linked directly to Planned Parenthood — a receptionist working across the street from the clinic told BuzzFeed news that their office was in lockdown. A manager at a nearby Supercuts, Denise Speller, told Huffington Post that she saw an officer shot during the incident. "Cops came flying through the parking lot, they almost hit each other they were driving so fast," she told the publication.

Despite the location, it seems that the city had no indication that something like this might happen. According to Jonathan Gonzalez, a reporter for Denver's NBC affiliate, no threats against Planned Parenthood had been made in the area.

Vicki Cowart, the President and CEO of Planned Parenthood Rocky Mountain, is telling followers on Twitter to pay attention to the authorities for developing information.

The facility also released a statement about the shooting:

And Planned Parenthood itself has tweeted about the incident:

As a precautionary measure, the New York Police Department announced it would step up security at Planned Parenthood locations in the city. That said, the NYPD also says there are no specific threats targeted at New York-area Planned Parenthoods.