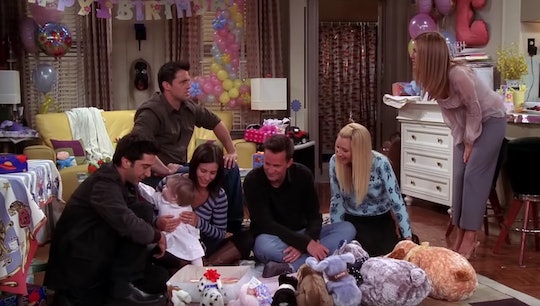 When Friends aired its final episode in 2004, the year 2020 seemed so far away. Well, guys, it's finally here and one iconic joke from Season 10 has become incredibly relevant. And fortunately, the actress who played Emma on Friends responded to the very joke Chandler cracked in the 17-year-old episode with a hilarious Instagram post.

Season 10 of Friends, the final season of the sitcom, focused on the group's lives as they made big changes and celebrated major milestones. And one of these milestones was the celebration of Ross and Rachel's daughter, Emma's, first birthday. In "The One With The Cake," Ross and Rachel (played by David Schwimmer and Jennifer Aniston, respectively) convince their friends to delay their plans so they can attend Emma's birthday party. But not everyone is too happy about this, especially Monica and Chandler, who had to cancel a romantic vacation to attend the bash.

In the episode, Ross makes his friends record a video message for his daughter, who's been in a deep nap, so he can show it to her on her 18th birthday. But Monica and Chandler aren't too happy when it comes time to recording their message. "Hi Emma," Chandler says. "It's the year 2020. Are you still enjoying your nap?"

Twins Noelle and Cali Sheldon played Emma during the show's final season. After ringing in 2020 earlier this week, Noelle had the most amazing response on Instagram to that line. "Just woke up from the best nap of all time, happy 2020!!," she captioned the post.

In the photo, Noelle photoshopped herself on to the set of Central Perk while holding a coffee cup. The photo is perfect and the response it's gotten from Friends fans has been even better.

"Iconic post lmaoooo," another added, and one more said, "this is amazing."

While Noelle's post was a welcome treat for Friends fans, 2020 actually started off with some bittersweet news. On the last day of 2019, Friends was taken off of Netflix in the United States, according to Variety. But the series isn't gone forever; Friends will eventually make its way to the brand new streaming service, HBO Max, this spring. Until then, there are plenty more naps to be had.