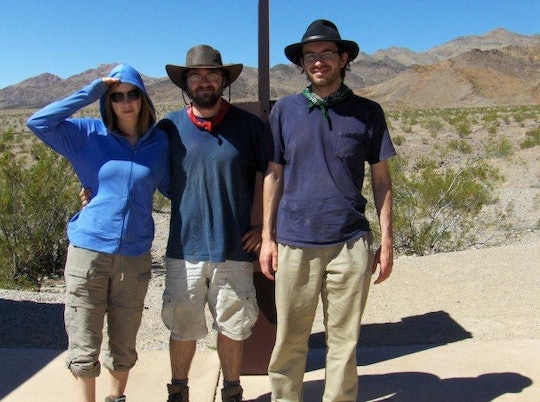 Actually, All Of My Non-Mom Friends Are Men

I have one non-mom female friend. Her name is Anne. We go out to look at designer clothes we can’t afford, then buy some makeup. We take the kids ice skating together; she babysits for them when I'm in a pinch. They call her “aunt” and ask to see her. She takes an active interest in them, has a favorite, and calls us when a gecko gets stuck under her awning, because my boys are dying to see a gecko. But outside of Anne, all my other non-mom friends are men.

There are several reasons for that. I didn’t have a lot of female friends before kids. I was never a girl to be friends with other girls; it always seemed like too much of a competition — who was prettier, who was skinnier, who had the best boyfriend. Motherhood gave me my first real and true girlfriends - women who also had kids who I could relate to — and I’m grateful for it. But before that, girlfriends were few, and those I did see, I saw sporadically. They were still single, still into going out and staying out all night, and they melted away when I had my sons. Our lifestyles were different. My male friends were never the type to party like college students, even when they were college students, so they stuck around.

Since I never had a ton of female friends, the guys who stuck around are ones I’ve known for forever. One cried at my wedding. One was a groomsman in my wedding. Another just came back after a long time away, and we’re so grateful to have him. These are the guys who come over for dinner, who stay for a movie afterwards, who amuse themselves while we put the kids to bed, and then talk about the books they’ve been reading.

There are other reasons beyond longtime friendship that I keep my guys around. For example, my guy friends care about politics, and care about what's going on in the country. So when there's a protest, it's my family (kids included), my guy friends, Anne, and a few university friends who may or may not bring their kids. I'm grateful that the guys come to the protest. They give me someone to talk to other than my husband. My guy friends are also book and music nerds. We trade books back and forth: Neil Gaiman's Sandman, the new Stephen King books, obscure horror from the 1900s, stuff based on H.P. Lovecraft. They expand my reading and expose me to things I'd never find on my own.

I need someone to remind me that, in a previous life, I watched Amityville Horror and The Ring and saw slasher films in the theaters. That person didn’t have kids. That person was different than who I am now, but still a part of me.

They also nerd out to music the way I do. When Bowie died, it wasn't girls I mourned with, but guys. I talk to them about where I want to tattoo Bowie lyrics. They like to listen to LPs with us, so we often have dinner while listening to The Talking Heads on vinyl. I may have missed the Willie Nelson concert because I had to watch the kids, but they told me all about it, and we all swore I'd go next time someone cool played in a venue nearby.

My guys are also into cruder humor: Rick and Morty, for example, that vile cartoon on Adult Swim. While I won’t watch that, even though I’m dragged into it often, I love watching Archer, the secret-agent spoof on FX. Both cartoons are wildly vulgar, nihilistic, and ridiculous. But I need that in my life. Someone has to push me to watch them, because I always think I'll hate it, and my husband and the guys are glad to, especially when I’m traumatized by it.

They also watch the movies I can't stomach watching anymore. Every Halloween, they come over for a movie marathon, and watch classics like Pumpkinhead, Texas Chainsaw Massacre. They add in various Italian horror no one ever watches. And finally, there’s always Blood for Dracula, their perennial favorite. I’m usually upset and go hide in the bedroom partway through, but I need someone to remind me that, in a previous life, I watched Amityville Horror and The Ring and saw slasher films in the theaters. That person didn’t have kids. That person was different than who I am now, but still a part of me.

In the day-to-day of motherhood, things get lost. I adore being a stay-at-home mom, and I adore homeschooling. But I was a person before that, one who watched horror movies and didn't see the faces of her kids on all the victims; one who listened to David Bowie and Wilco and The National, not an endless loop of They Might Be Giants' "Science is Real," "Yellow Submarine," "Bungalo Bill," and Harry Potter. I talked about politics all the time, without small people climbing on me and saying, "Read book. Read book."

They’re not just my friends; they’re his friends, too. I’m grateful for that.

People ask if my husband gets jealous of my guy friends. He doesn’t, for several reasons. We have a strong marriage, and he knows I'm not sexually attracted to any of my guys. He’s also friends with all my guy friends on equal terms, not just because they’re friends with me. He likes to talk politics with them, and watch horror flicks (he was a film major), and trade obscure science fiction novels with them. They’re not just my friends; they’re his friends, too. I’m grateful for that.

And I’m grateful for my guys. They’re fun; they push me in directions I wouldn’t normally go. And they’re been there for me for a long time. They fulfill all the capacities of good friends, but they just happen to be male. And I, for one, don’t care.