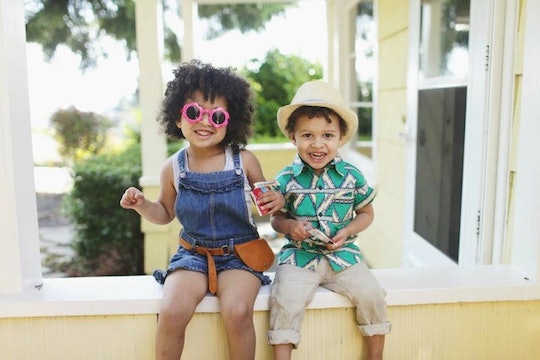 Actually, I Don't Care How Much TV My Kids Watch

TV taught my children how to read, how to tell time, what colors were which, and also has given me the much needed me time that I wouldn't otherwise get. So when people ask about how I control screen time, I shrug and tell them the truth: I don't. Because really, I don't care how much TV my children watch. Despite the many reports that insist children shouldn't watch TV until 2 (the American Academy of Pediatrics actually recommends that infants and children under 2 avoid TV), I don't have the capacity or the energy to allot a TV-time schedule for my 6 and 7 year old every single day.

Before I had kids, I planned on not introducing TV to my children until they were past 2 years old. But then I got pregnant with my second child faster than I thought I would, and that pregnancy left me sick on the couch for weeks, with a 6 month old crawling about. My ex-husband and I had bought a set of 26 learning DVDs that covered weather, learning the ABCs, numbers and spelling, and had planned on showing our daughter when she got older, but our plans quickly changed. When I realized I couldn't entertain my baby because I was nauseous any time I made a movement, I figured I'd try the DVDs out. Instantly, she loved them. She didn't necessarily sit and watch all the way through, but she'd come back to the TV and sit quietly for a few minutes at a time throughout the day. And those few minutes were everything to me. I needed them so badly.

As my daughter grew up, and as we welcomed her brother into our lives, I eased up on all of my ideals surrounding screen time in our home. With two kids under 2, I learned that the TV was actually an excellent babysitter. It was free, and it kept my children sitting still and engaged for longer than five minutes at a time. I was able to shower, fix meals, and clean a room and have it stay clean until the kids discovered it needed to be dirty again. Even though having the TV on my side was a relief, I still felt guilty about the fact that I let my young children watch it.

I wondered if they'd struggle in school because they couldn't concentrate, or if they wouldn't be able to comprehend things because their brains had turn to mush.

I figured that all this exposure to TV so early on meant that I'd see the effects in them as they grew up. I wondered if they'd struggle in school because they couldn't concentrate, or if they wouldn't be able to comprehend things because their brains had turn to mush. I also wondered if I was selfish to "risk" all of that, for a measly 10-minute shower.

Then at 2, after watching Word World and Super Why!, my son started reading. At first I thought he'd just memorized everything we had read to him, but then he was reading signs as we drove by in the car. He read labels in stores. He was able to spell these huge words by sounding them out, and eventually taught his sister, who is 14 months older, how to spell as well. Shortly after, my daughter started writing out math problems on scratches of paper. She'd scribble down things she'd seen on TV and ask us to give her harder equations to figure out once she'd worked her way through the simpler ones.

Regardless of whether we intended it or not, they were learning. And they liked it.

I was surprised, mainly because my ex and I had promised to be hands-off parents, ones who didn't force our children to learn anything early because we believed they should have and enjoy a childhood for as long as possible. But when we'd ask them where they learned to read, write, and do math, they'd list off the shows they loved to watch, the ones we'd willing let them watch. It made us laugh. My ex-husband and I spent so many night discussing the pros and cons of screen time for our children. We were always in favor of screen time, especially with my son, and especially when it came to going out to restaurants. But the recommendations were the recommendations, and we'd always worried what breaking them would mean. But putting my kids in front of the TV actually was helping them. Regardless of whether we intended it or not, they were learning. And they liked it.

Now that they're older (6 and 7 years old), screen time in our home involves more than just the TV. It includes video games, computer games, YouTube, and games on my phone. My son has even started creating beats by recording sounds around the house and uploading them onto one of his video game consoles. My daughter loves watching yoga videos to learn new stretches. Anytime they have a question, they ask Siri on our phones, or they Google it themselves. The TV shows they watch aren't educational anymore, and sometimes it annoys me to hear them quote pointless sentences from shows they're interested in.

Spending time in front of the TV has made my kids more curious about the world outside of what they know. I definitely have days where I'm like, "ENOUGH TV! GO OUTSIDE!" and I watch as my kids slump down on the couch, complaining that they're "bored." But within minutes, they're running around, shouting and acting out scenes they've seen on TV, rewriting storylines of their favorite shows to accommodate themselves. And I've gotten to take a few extra long showers. I'd say we're all pretty happy.