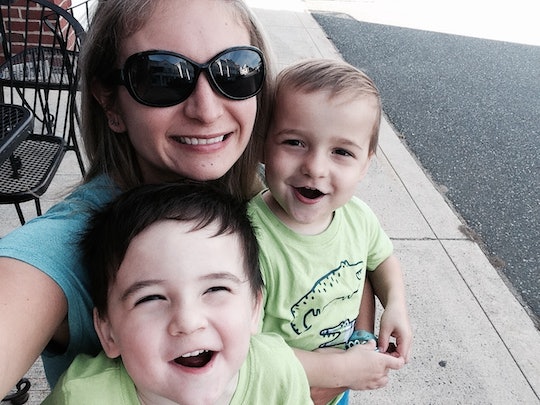 Actually, I Love My Postpartum Body

I grew up in an athletic family. Being both strong and thin was something that my family placed a lot of importance on, and still does. Every summer I watched my mom try on countless swimsuits in an effort to find a bikini that hide her stretch marks. As I grew up and friends started having kids, they'd look at my (then) still perky boobs with envy and tell me to enjoy them while I could, because they'd be history once breastfeeding had its way with them. While I always knew I wanted to have kids of my own one day, I dreaded the thought that I would to "ruin" my body in the process. But now that I've got the mom bod I'd always feared, there's actually a lot to love about my postpartum body.

Let's talk boobs, since mine always seem to be the first thing people notice anyway. I was a solid D cup before I got pregnant and ballooned to an E while pregnant. But once my milk came in? My bras didn't even have a size at that point, they just said "sex goddess" on them. Yes, I was bleeding into mesh underwear, healing from a major surgery, and surviving on less than four hours sleep a night because I was taking care of twin newborns, but my chest felt like there were two giant boulders parked on it. I looked like Jessica Rabbit in the flesh, complete with the heavily hooded eyes (like I said, I was really, really tired). My partner definitely made sure to let me know how much he appreciated the eye candy those first few months after the kids were born, even if he too was too tired to try and get frisky. I'm not breastfeeding anymore, but let's just say I've got a secret and her name is Victoria. 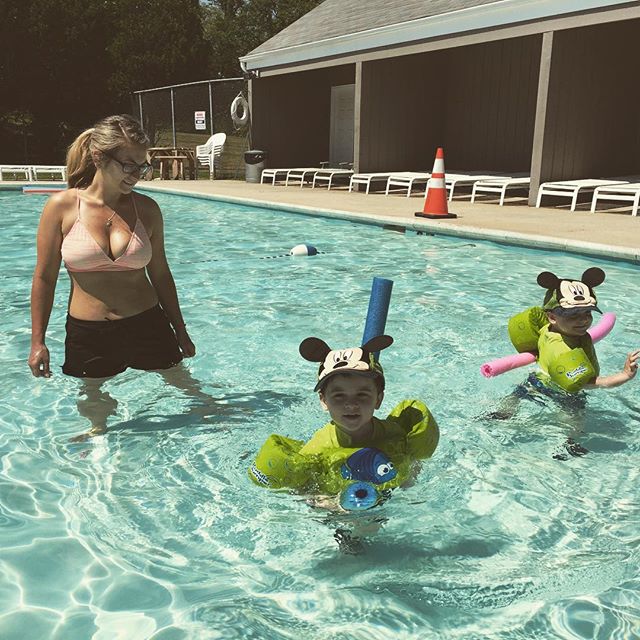 I'm equally proud of my c-section scar. I wish I could show it to more people without getting arrested for indecent exposure. It tells a really cool story of one of the most amazing nights of my life, and I'm not at all ashamed of it.

I'd always wanted a white tattoo because I thought it was cool how they sort of look like scars, so you can't tell at first glance if they're art or the result of an epic night (thought I suppose they could be both). But not all artists do white tattoos, plus I'm a wimp when it comes to needles and tattoos are pricey. My c-section scar, on the other hand, looks totally badass, was covered by my insurance, and thanks to the magic of the epidural, I didn't feel a damn thing while it happened. (Seriously though, numbing injections before tattoos, how is this not a thing?)

My OB is a surgical mastermind who put my incision so low you'd have to be on the towel next to me on a nude beach in order to see it, and honestly, I'm a little bummed out by that fact. Just like I'd be proud to show off a fresh tattoo, I'm equally proud of my c-section scar. I wish I could show it to more people without getting arrested for indecent exposure. It tells a really cool story of one of the most amazing nights of my life, and I'm not at all ashamed of it.

And if you're secretly a lazy girl at heart, then "I just had a baby" is the perfect excuse to let you inner sloth out and let go of grooming entirely if you want to. Hell, I did. No one will comment if you don't pluck your eyebrows, and they'll politely ignore the chin hairs you've sprouted too. (But toddlers aren't so polite, they'll notice and point them out, usually while you're talking to the pediatrician or at some other equally embarrassing moment.) You can wear the same yoga pants five days in a row before your partner suggests you change them, and even then they'll only mention it in a gentle, non-judgey voice as to not upset you. And messy buns stay better when your haven't showered in a couple days, trust me.

Before I became a mom I felt like my look always had to be on point, even on the days when I wasn't feeling it. Once I had a baby I only stopped primping unless I actually wanted to doll up for the day. It made me realize that I still love to rock a red lip, but I also love my natural look too. Greasy hair don't care — and in fact, it looks pretty good on me.

Sure, loving my postpartum body is not all awesome. About 12 weeks after the babies arrived, that glorious mane I sprouted while pregnant started to come out in clumps due to the shifting hormones everyone warned me about. And it's a cruel joke on postpartum women that now, with kids to look after, you get the additional chore of having to find the time to unclog your shower drain of hair balls. But deep down, don't we all want the chance to act out that scene from The Craft when a super b*tchy Christine Taylor finally gets her comeuppance as her hair falls out in the bathroom? Only my cat witnessed my performances, but I'm pretty sure his meow was meant as applause.

I saw how awesome I looked, how amazing I was for standing tall after having twins and a surgery, even if I was going to have get used to parting my hair on the other side for a while.

When I finished my performance and saw how much hair there was in the drain I had a moment where I wanted to cry, but then I saw my reflection in the mirror. I didn't just see my hair, I saw the rest of my freshly showered and therefore sexy-looking body. I was luscious and wet, like Kim Kardashian in the "Milk" video. I saw how awesome I looked, how amazing I was for standing tall after having twins and a surgery, even if I was going to have get used to parting my hair on the other side for a while.

And yes, the Lady Gaga talons my pregnancy hormones helped me grow while pregnant were pretty fabulous, but trust me, I was thankful for my short, brittle postpartum fingernails the first time I accidentally left some poop under one of my stiletto nails to reach into a bag of chips. Nope, that's not a new mystery flavor. Actually, the first time this happened to me I spent all day wondering if it had been so long since I went grocery shopping that the bag of chips had gone rancid. The second time I saw the tell-tale smear of brown under my nail and realized the horror of what I'd just done. I was a life-long nail biter before I got pregnant, so I was naturally thrilled that long nails came as a side effect of my pregnancy hormones. I wanted to try and hang on for them for as long as I could, but as soon as I realized I had willingly ingested poop, those nail clippers could not come out fast enough. Suddenly I loved my new, short nails.

I know my body is never going to be what it was before I became a mom. But I've come to realize that even if I never had kids, my body still wouldn't be what it was four years ago.

I'm never going to be the type of person who considers her stretch marks to be tiger stripes or the woman who sees her post-baby body as a glorious, shining beacon of female empowerment that showcases how amazing biology is. It's awesome if that's your thing, but it's not mine. I wish I could have so much self-confidence and self-assurance, and I'm working on it. Right now when I see my wrinkled belly button, I don't see a navel that was a warrior through the trials of pregnancy, I see what looks to me like a grumpy face accessorized by two birth marks. I know my body is never going to be what it was before I became a mom. But I've come to realize that even if I never had kids, my body still wouldn't be what it was four years ago. Seeing that finally allowed me to love my body as it is. Bodies, like personalities, are meant to change and grow and adapt, and having kids was a big change that left an equally big mark on my body — and my heart. My body is far from perfect, but I love it because it's a reflection of who I am not just as a mom, but as a person. My body is me, right here, right now.

Before I had kids, I had unrealistic expectations for my own body. Even though I knew the women I saw on magazines covers were photoshopped, that never stopped me from believing I could obtain the same body proportions if I was just disciplined enough. I guilted myself over every slice of pizza and skipped workout because it was taking me further away from having a six pack of abs. But when your stomach swells to the size of a small planet and then deflates down to an asteroid again, it doesn't matter how many crunches I do or how clean my diet is, my midsection will always have the extra skin rolls of a Shar-Pei puppy. Unless I want to have a tummy tuck (and seeing as how my body hates anesthesia, that's so not happening), it's just a fact. I'm not going to stop working out all together just because I'll never have a washboard stomach — I love how sweating makes me feel physically and mentally too much for that — and I'm just realistic about what my body can and can't look like.

So yes, I guess I do believe that having kids "ruined" my body. But it also made me love my body more than ever before. I think that's what matters more.