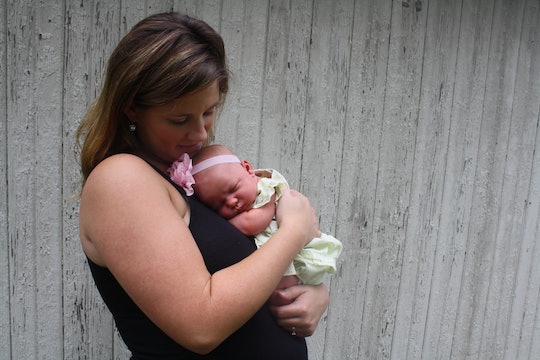 Actually, I Loved The Newborn Stage

Life with a newborn changes everything. And after having four of those said newborns, I finally know that little life lesson better than I would have ever thought possible, which is why you'll probably think I'm wild for what I'm about to say, but here goes nothing: I loved the newborn stage. In my experience, it's been easiest part of parenting — and I honestly mean that. Even despite the part where you have to recover from birth, and you feel like the milk is leaking from you more than a cow on a farm factory, and you're aware of the unbelievable pain you feel just by shifting positions, there's something that happens to a woman's brain during that newborn stage.

I've basically spent each of my four pregnancies dreading the newborn stage. I start thinking about how much sleep I'm about to lose and how I'm going to have to get up every two hours and how I will never be able to take so much as a single bite of food without breastfeeding at the same time and I just want to cry. (And actually, I'm pretty sure I do cry. A lot. I'm not what you would call a graceful pregnant woman.) But then, two things happen: First, I reach that miserable stage of pregnancy where the prospect of having a newborn becomes much more desirable than the thought of being pregnant a single hour longer, and then second, the baby comes out and it's never as bad as I think it will be.

Yes, really. Each time I've had a baby, the newborn stage is never as bad as I make it out to be in my head. It's my own personal theory that there are some serious hormones involved helping new parents get through that newborn stage, or, and this is just as probable, that I'm so sleep deprived that I've reached the point of being so exhausted I don't even realize how tired I am anymore. Whatever it is, I somehow survive better in the newborn stage than I do now, in the stage where my baby sometimes sleeps through the night and sometimes doesn't.

I've found that there's something that shifts to make survival with a newborn not only possible, but enjoyable as well.

I've noticed that as soon as my baby starts sleeping more through the night, somewhere around four months old, I have a harder time than I did in the newborn stage. It's like when you're just going about your day and you're not even really that hungry, but then you take one little bite of food and suddenly you realize you're starving and it's all you can think about it — that's exactly what happens to my relationship with sleep. In the newborn stage, I'm pretty content to survive on little stretches of sleep. But as soon as I get one solid stretch lasting more than four hours, I'm toast. My body wakes up and realizes it's been duped and suddenly something shifts and sleep becomes something I dream about, think about, and obsess about over constantly.

The newborn stage is easier for me than the later stages of sleep deprivation.

When we brought our daughter home from the hospital I was already used to popping up straight out of bed every two hours without a problem, because I'd already had three other kids. But after my baby segues into the 3- and 4-month-old stage (and beyond), I struggle. Now when I wake up, it takes me so long just to realize what's happening because my brain's lost in a fog, wondering what on earth that sound is and where I am before I realize, with horror, that I need to actually get up. My body stays on auto-pilot during the newborn phase, but once it ends, I crawl in my bed, wide awake, obsessing over how much sleep I'm not getting.

I know some people like to prep new parents on what to expect out of life with a newborn, and I know that the newborn stage can be incredibly hard sometimes, like, for instance, when my second daughter had massive colic and didn't stop projectile vomiting and screaming for months. But overall, I've found that there's something that shifts to make survival with a newborn not only possible, but enjoyable as well. For some reason, whether it be hormonal or just a mindset, the newborn stage is easier for me than the later stages of sleep deprivation.

Or maybe I find the newborn stage so much easier because that's when I'm more willing to cut myself a break. I let the "normal" stuff of life slide a bit more, allowing myself to revel in pants that are 100 percent stretchy, forgoing cooking and taking a break from the pressure to keep a clean house because later on, once you've passed through this stage of chaos, I know the expectation will be there for me to "bounce back" and get back to normal.

I know every stage of parenting comes with its own set of different and unique challenges and that everyone will experience them a bit differently, but I wish more people knew that instead of absolutely completely dreading the newborn stage, give yourself a break. Maybe it'll be easier than you thought. Or maybe you'll look back and miss it.