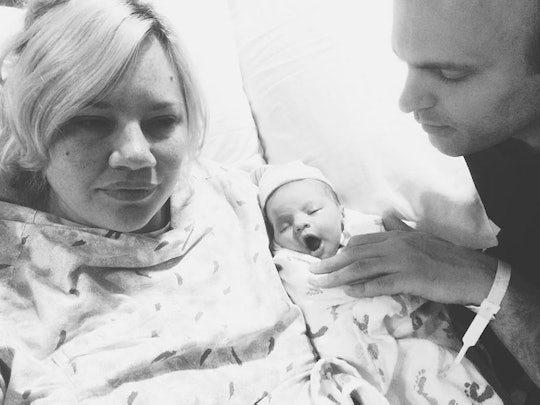 Actually, I’m Glad I Didn’t Have The Home Birth I Thought I Wanted

When I first thought about having a home birth or hospital birth, for some reason, I decided I wanted a home birth. It certainly wasn't the norm at the time, and having a home birth has only been a growing trend in America in recent years, so it wasn’t like I'd been around it enough to want one. In fact, when I got pregnant, I didn't know anyone closely enough who'd had a home birth. But somewhere in the back of my mind, I viewed it as the one feat in my life that would make me superwoman and that would fulfill my desire to do something only a "strong woman" could do. If thousands and thousands of women could give birth at home throughout history before modern medicine, then why couldn’t I? The idea of trying it thrilled me like an athlete yearning for top glory in their sport. For me, a home birth was immortalized my mind as the pinnacle of my femininity.

But then I got pregnant. And reality hit. This was not some grand idea in my mind anymore. I was going to be birthing a real baby. An infant was going to make its way through my vagina in a mere matter of months. For the first time. So when I chose my doctor, I really stopped to think about what I wanted out of this first-time adventure. Suddenly, the hospital didn’t look so bad anymore. I was fortunate to find a doctor in my small town who would work with my desires and who delivered babies in a birthing center at the small, local hospital. When I took a tour of the facility, I was relieved to find a birthing center with a close-knit, sincere, and thoughtful staff. I’d have all the attention I needed, the labor and delivery would take place in the same large and comfortable room, and I felt confident that the staff would honor my wishes for my birth plans, which were to have my baby as drug-free as possible and, hopefully, vaginally.

Though I don’t know how things would have turned out if I had gone with a home birth, I’m glad that I didn't have to wonder.

As my due date approached and passed with no signs of labor, I was especially eager for my next appointment. Though I don’t know how things would have turned out if I had gone with a home birth, I’m glad that I didn't have to wonder. Because at my next weekly appointment, my doctor found out that I had little amniotic fluid left. Because of that, we made the joint decision to induce. And later, during delivery, my doctor noticed that my daughter was “sunny side up,” which meant that her head was down but her face was up. After over 30 hours in labor, all of this led to the best choice I knew to make in that moment: to have a c-section.

I know there's no way to truly tell what would've happened had my entire pre-natal care leading up to birth been with a midwife and the intention of a home birth, but in thinking it all through I realized that I was going to have to trust one thing or the other: my own body, with no quick access to modern medical technology, or a team of medical staff with all of the equipment possibly needed. Despite my desire to trust my body alone, this was my first time doing this, and I was putting so much pressure on myself to “do it right,” as if the only “right” way to have a baby was entirely on my own terms. The thing is, I was just as able to trust my body and my mind in the birthing center that life-changing day as I would've ever been in any place. The opportunity to experience such an encounter is not limited to how, when, or where I decided to deliver my child.

And that’s how I know, as I reflect on my labor and delivery, that I’ve also gained the perspective that this was just one birth experience out of hopefully more to come. I understand no pregnancy or birth is exactly the same, but I’ve experienced the general idea now and discovered how I react in those circumstances. I’ll take that into account next time where there will hopefully be another opportunity to have a home birth if I want to. Besides, birthing children, however it's done, is only one aspect of my femininity. It's not the only thing that makes me a fierce and capable woman.